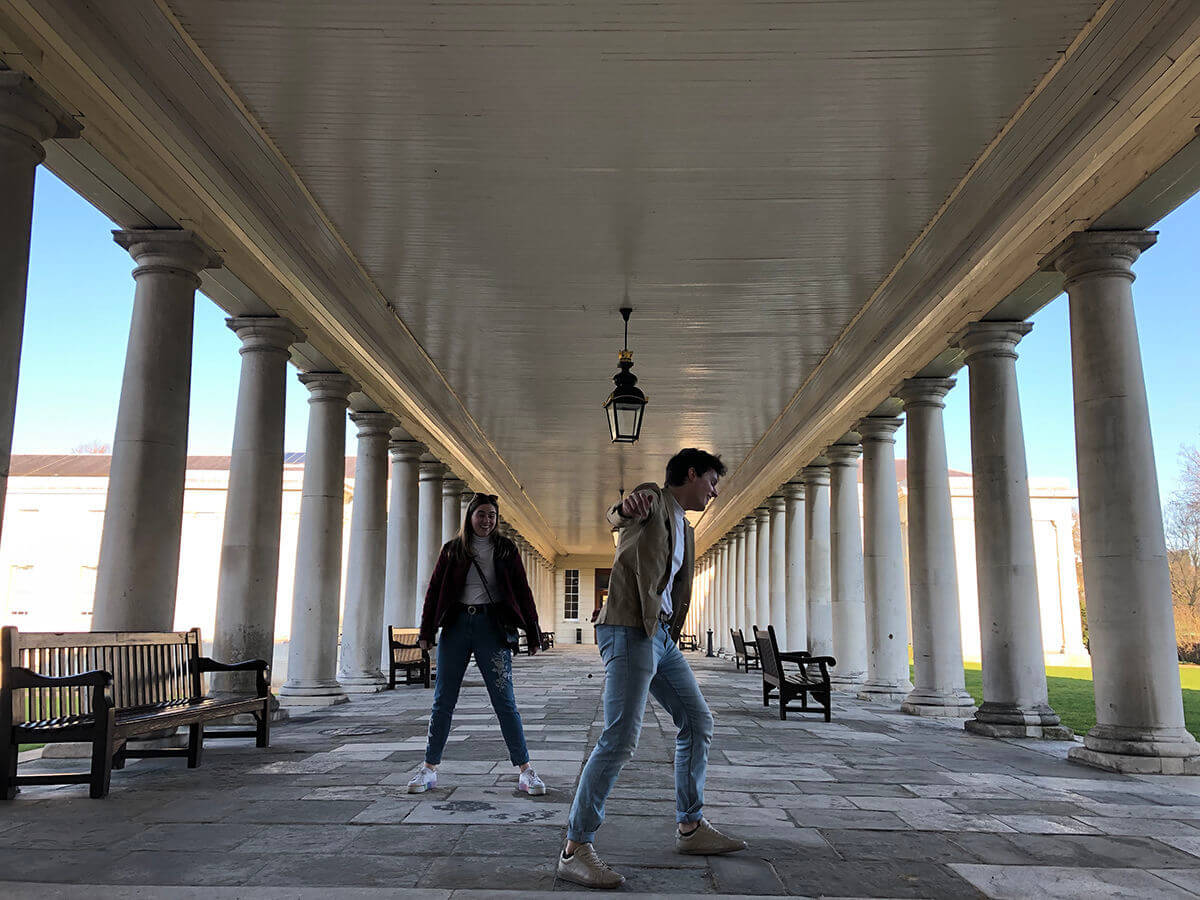 Bozzo with friends in Greenwich

Dominic Bozzo is a computer science major, a subject that has always required him to think analytically. It may seem surprising then, that he spent his semester in London as an intern at a top design agency.

“I work with 20 people who all have art degrees," laughs Bozzo. “They have creative backgrounds and have all grown up doing graphic design.”

When Bozzo learned that he would be spending a semester in London, he immediately knew he wanted to gain as much as possible from this experience, and that this would only be possible if he pushed himself out of his comfort zone. Looking through the internships available, PowerStation Studios immediately caught his eye. Having taken Photoshop courses in high school, he thought he may be able to contribute something to the company through his time there. At the time, he didn’t realize how much they would give him in return.

“I was forced to think creatively and get out of my comfort zone," says Bozzo. “You have to dive right in and become an expert on something in a day, because in a 20 person company everyone’s reliant on each other.”

PowerStation Studios is a design focused agency that prides itself on providing creative and unexpected solutions for each project, taking concepts and ideas and making them in commercially successful and unique real world designs and experiences. Their success lies in their ability to think outside of the box, and to work collaboratively to come up with the most creative responses. The founder of PowerStation Studios, Dave Collins, believes their different way of thinking is integral to their success as a company.

“PowerStation Studios at its core is a problem solving agency that happens to use creative and visual tools to solve client problems and we do this through a process we call unconstrained thinking,” says Collins. “When we look at a problem, we remove all probable and possible constraints and just look at the potential solutions. Once you have an array of potential solves, you start applying the constraints until, by exclusion, you find the solution. This allows us as a company to find new and creative solutions to client projects.”

Luckily, being surrounded by talented, creative individuals was inspiring for Bozzo, who began to develop his lateral thinking skills and also embrace his artistic side. Shortly into his placement, he asked to be more involved with design, and worked on Photoshop and Illustrator to contribute to the company’s projects. The encouragement and mentorship he received from his colleagues allowed him to learn quickly, and soon he was designing graphics that were included on their social media.

“One of the first design projects I got put on was making Instagram posts for a large company, so I’ve made Instagram posts which are now on their official Instagram, which is pretty cool,” reflects Bozzo.

Not only did Bozzo take a lot from his internship, he also felt he was able to use his analytical mind to the benefit of the organization. When conducting research, he would be incredibly thorough, producing numbers and statistics for various projects and trying to dig down to analyze the causes of certain behaviors, something which was noticed by his employer.

“Bozzo’s analytical background meant that his research and cognitive problem solving skills were instantly applicable to grasping the problem,” says Collins. "His ability to disseminate facts and dissect a problem to its core was invaluable.”

The experience at PowerStation Media unlocked Bozzo’s creative skills, demonstrating that it is possible to be both analytical and creative. As well as being beneficial to the organization, watching Bozzo develop as a professional was satisfying for his colleagues.

“During his time with us, it was pleasing to see Bozzo’s innate creativity free up and the analytical and creative parts of his brain cooperate rather than battle, allowing Bozzo to reach solutions that a pure logical approach would have excluded,” reflects Collins. “Everyone has the ability to be creative within them, and allowing yourself to explore and express that side will always add value to what you do.” 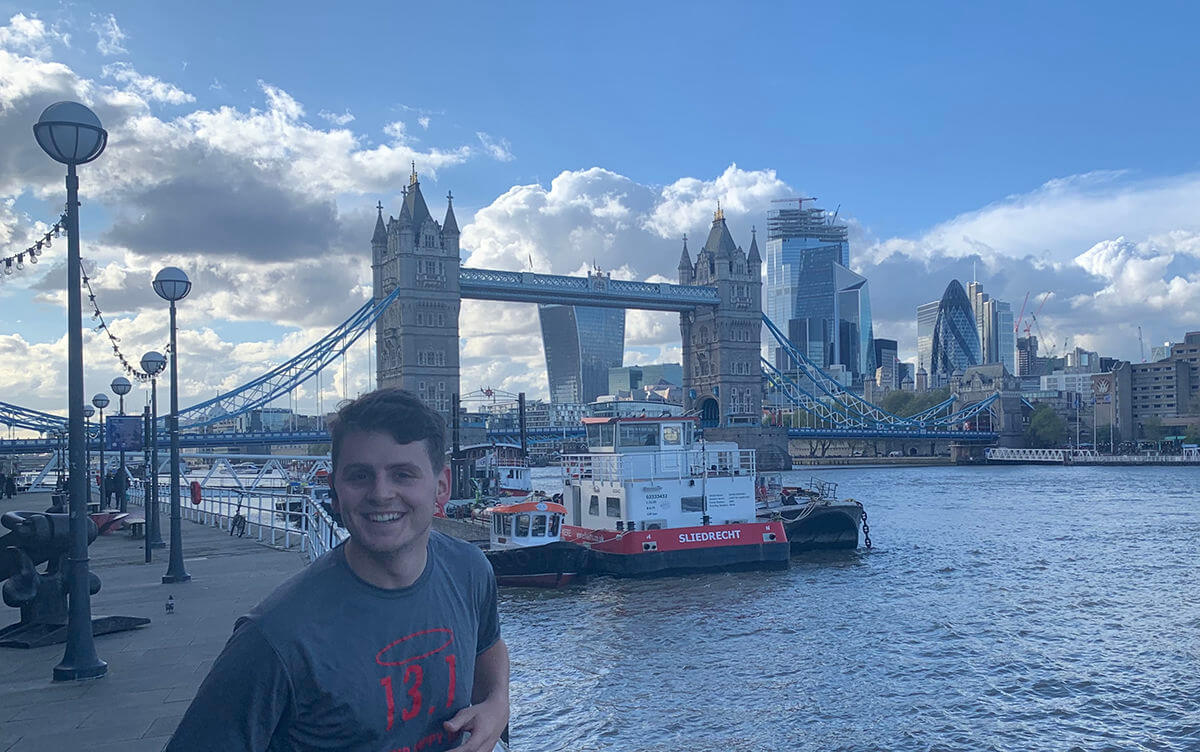 Studying abroad allows students to gain a greater understanding of the world, and of themselves within it. Outside of his internship, Bozzo continued to find ways to expand his horizons and redefine the ways he thought. As a keen runner, he discovered and joined London’s Midnight Runners, a weekly club that brings together people from all over the city to run and socialize. Having always seen running as a time to be introspective, Bozzo suddenly saw how it could be used as a medium to meet people from London and from all over the world.

“I went to run with them for the first time and I saw a huge community of people not only from all over the world, but who lived here who were doing the same thing,” says Bozzo.

Bozzo has spent most of his Tuesday nights in London running with the club, and spending time at a local pub with other members. The club forced him to socialize outside of the Notre Dame bubble and by doing so, he’s met people from all walks of life who share his interest in running. It has changed his view on running and showed him it can also be a shared experience, as well as a time for reflection.

“You're listening to upbeat music as you're running around and you're more joyful and having a good time; your focus and energy is high,” reflects Bozzo.

From small things, such as how he sees running, to unlocking his inner creative side, the experience in London has had a profound impact on Bozzo. He has learned a lot about who he is and what he is capable of achieving, both with his analytical and creative skills. Bozzo knows how valuable his time in London has been and he is determined to use what he has learned as he continues in his degree and career.

“I’m encouraged to think differently, which moving forward will help me to have newer ideas for how to do things,” states Bozzo.