The Notre Dame London Shakespeare Lecture in Honour of Professor Sir Stanley Wells started at the London Global Gateway in 2011. Envisioned as a celebration of a scholar of world renown, it is also a venue for students on the London program to meet leading academics and theatre practitioners who shape their fields.

Initiated by Professor Gregory Kucich and Shakespeare scholar Boika Sokolova, the lecture series has developed in close collaboration with the Shakespeare Birthplace Trust in Stratford-upon-Avon and the Shakespeare Institute (University of Birmingham).

The founding lecture, given by Professor Wells himself, presented a sweeping view of a lifetime dedicated to the study and teaching of Shakespeare, to his versatile interests and contributions to practically all major fields of the subject.

One of the highlights of the rich academic program at the London Global Gateway, the Notre Dame London Shakespeare Lecture is an important sign of our presence in the intellectual life of London.

Carol Rutter (Professor of Shakespeare and Performance Studies at the University of Warwick) delivered the eleventh Notre Dame London Shakespeare Lecture, 'Widening the Shakespeare Circle: the Playwright, the Diplomat and the Theatricality of Everyday Life'.

Register Here for the next event in the 10th anniversary series 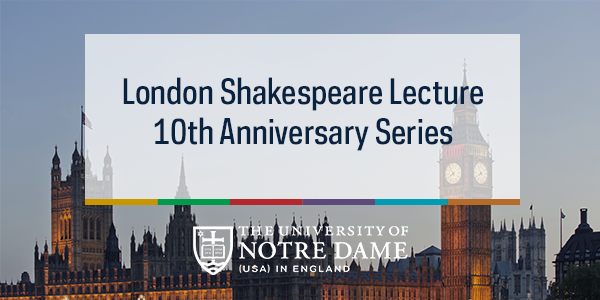 February 7 - Michael Dobson: 'Shakespearean Comedy and the Curse of Realism'.

Dromgoole, artistic director of Shakespeare's Globe, discusses his own experience with Shakespeare as well as the broader reception to Shakespeare internationally.

March 24 - Ann Thompson: '"You need not tell us what Lord Hamlet said." Have we heard it all?'

Thompson, emeritus professor of King's College London, draws on her experience of editing Hamlet for the Arden Shakespeare series.

March 5 - Sir Nicholas Hytner: '"Stand and Unfold Yourself!" How to do Shakespeare'

Hytner is the artistic director for the National Theatre. His major Shakespeare productions include As You Like It (Royal Exchange, Manchester), The Tempest and King Lear (Royal Shakespeare Company), and Twelfth Night (Lincoln Centre, New York).

As teacher, theatergoer, reviewer, lecturer, editor, critic, historian, administrator, conference goer and broadcaster, Stanley Wells has spent a lifetime with Shakespeare. In this talk he reflects upon the changes in the Shakespearian scene over the past eighty years, and on his involvement with them.