The collection consists of a research collection of writings by and about Chesterton, as well as an array of personal items that belonged to Chesterton. As one of the premier English Catholic intellectuals of the 20th Century, Chesterton is well known for his many contributions to literature, journalism, theology, and the arts.

About the G.K. Chesterton Collection 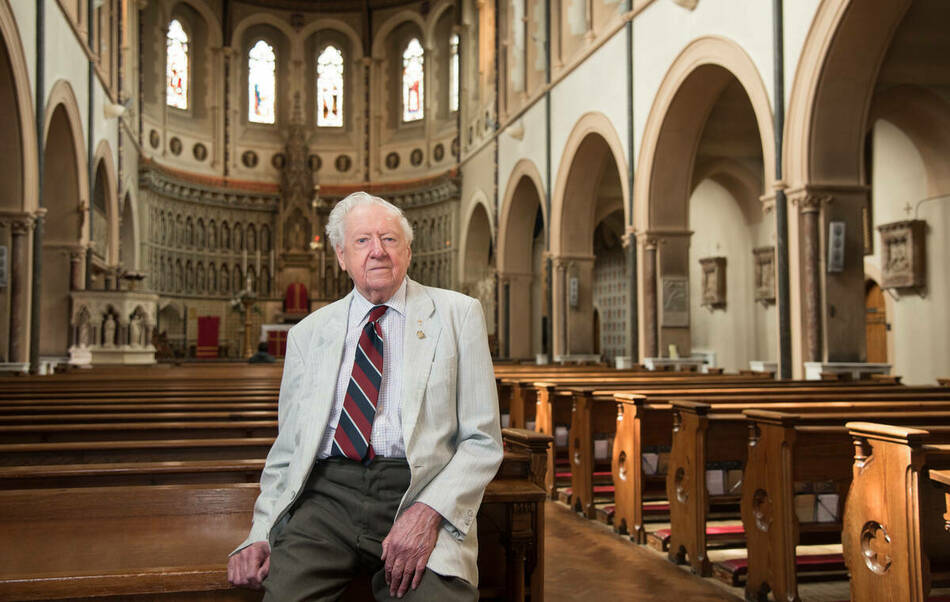 The collection was independently compiled by schoolmaster and bookseller Aidan Mackey, one of the foremost Chesterton experts and among the only surviving individuals with connections to Chesterton’s family circle. An admirer of Chesterton since childhood, Mackey has made furthering the genius of Chesterton his life's mission.

As well as publishing numerous articles, reviews and a story book including Chesterton drawings entitled "Mr. Chesterton Comes to Tea", Mackey also spent many decades acquiring materials by and about Chesterton. His interest in the great author led him to become friends with Dorothy Collins, Chesterton's secretary and literary executor after his death in 1936. After her own death in the 1980s Mackey acquired many of Chesterton's own books. In the 1990's, the Collection grew again, when the British Library offered Mackey custody of a large quantity of Chesterton memorabilia.

For many years it was under the custodianship of Stratford Caldecott and Centre for Faith & Culture in Oxford (with support from the Chesterton Institute at Seton Hall and later the Thomas More College of Liberal Arts). The Trust was formed by Stratford Caldecott in 2008 with the object of safeguarding the collection and promoting "the study of G.K. Chesterton and other writers for the benefit of the public by activities related to the establishment and maintenance in England of a suitably equipped research library". In 2013, the collection moved to the Oxford Oratory library building.

The early influence of Stratford Caldecott was instrumental in Mackey's building of the collection and the efforts of Rev. Jerome Bertram and Dr. William Griffiths in housing it at the Oxford Oratory have also been significant.

The Trustees see this move to Notre Dame's London Global Gateway as the best way to further these aims and provide a safe and fruitful setting for the Collection in Chesterton's home country. Mackey is delighted about the move. "To watch as the trustees and Notre Dame have arranged the collection’s elevation to so prestigious a home as the London Global Gateway is, for me, warming beyond measure,” he said.

Gilbert Keith Chesterton was a Catholic English author and genuine polymath who wrote prolifically on philosophy, theology, Catholic social teaching, literary criticism, history, and more. He was a journalist, a writer of fiction and poetry, and was formally trained in the areas of art and design. He is known as the Prince of Paradox because of his whimsical, humorous style of writing that contained serious commentary on politics, philosophy, theology and many other topics.

Chesterton’s most popular work is his fictional priest-detective series, Father Brown, but his contribution to literature, journalism, and academia goes far beyond this. During his lifetime he penned 80 books, several hundred poems, 200 short stories, 4,000 essays, and several plays. Despite being one of the most prolific authors of the 20th century, Chesterton considered himself primarily a journalist, having written countless articles for the Daily News, Illustrated London News, and his own paper, G.K’s Weekly.

The Chesterton collection reflects all these many talents, and is particularly remarkable for its inclusion of some of Chesterton's “design.” For example, a children’s theater set designed by Chesterton which he used to run shows for local children, as well as a plethora of his personal books that contain doodles in the margins, and sometimes right across the text.

Chesterton had a very specific connection to the University of Notre Dame in the USA: He was named a visiting professor and given an honorary degree at the home campus in South Bend, Indiana, in 1930. It is appropriate, then, that Notre Dame, widely recognized to be the leading Roman Catholic teaching and research university in the United States, is home to such a remarkable collection. Serving as a tangible connection between the Notre Dame main campus and the University of Notre Dame (USA) in England, the collection also aims to unite the University with the broader Roman Catholic community in the United Kingdom.