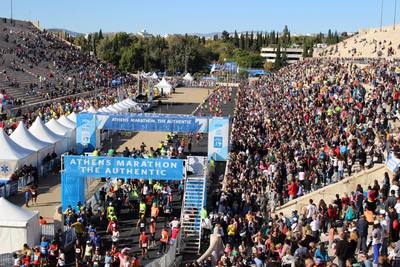 Congratulations to Annie Batcheller and Teagan Dillon from London and Jack Calvert from Rome for braving the notoriously challenging course – 42,195m long, and a considerable portion of it uphill! Their respective finishing times were 3:36:51, 4:11:15, and 4:36:53.

The students retraced the steps of Pheidippides – said to have run from Marathon to Athens in 490 BC, bringing news of victory over the Persians at the Battle of Marathon – and also those of modern-day Olympians. The Athens Authentic Marathon concludes in the Panathenaic Stadium, the site of the first modern Olympic Games in 1896, and follows the very same course used in Athens’ 2004 Olympics. 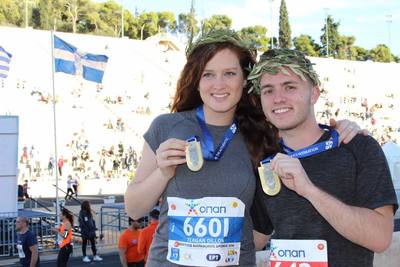 Annie, Teagan, and Jack competed among some 50,000 athletes from 105 countries and were cheered on by thousands of onlookers. Inspired by Athens’ rich sporting history and moved by spectators’ support, Teagan said:

“My friend Jack and I were excited to run our first marathon together, and the fact that it was on the course of the first marathon made it that much more special. The course took us through several small villages where people gathered on the streets to watch us run. I teared up several times as I felt the pride they have in their country.

“The experience was one I will never forget, and I am so thankful I was fortunate enough (and healthy enough) to be able to participate in it.” 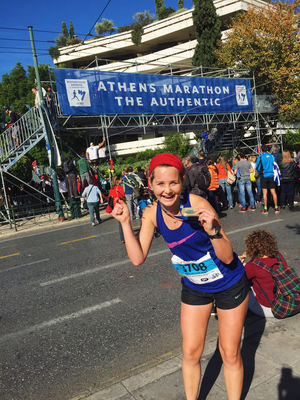 “Running the Athens Marathon is a runner’s dream because it is regarded as the marathon that created all the hype around marathon running. For me, the marathon was a memorable experience because of its legendary beginnings and the encouragement I received during the race from people of different backgrounds which reminded me that some things transcend cultural and language barriers.

“It was definitely a once-in-a-lifetime opportunity and one of the highlights of my study abroad experience.”

All three students are avid runners and had trained hard in preparation for the marathon. Annie did a lot of her training in London’s parks and found it “a great way to escape the noise of the city.” “My favorite parks to run through are Hyde Park and Regent’s Park because of their size,” Annie said. “Running through London was a great way for me to familiarize myself with the city and visit places that I usually would not have gone.”

Teagan also found that her training enabled her to “get out and see more of London,” and she particularly enjoyed a route through Hyde Park and along the Thames Path.

Jack had been working towards his goal to run a full marathon since taking part in Notre Dame’s Holy Half in 2015: 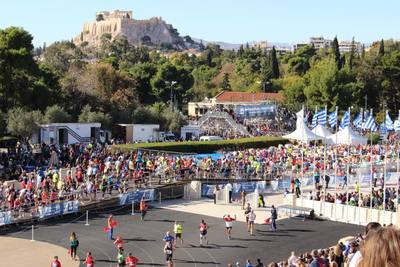 “That race showed me that, with some training, running a full marathon was a reachable goal. Although this was a difficult first race, it was the most gratifying run of my life and I’m so happy that I did it! It showed me how much I am capable of and I already can’t wait to run another marathon and improve!”

Annie and Teagan have got the bug for marathon-running now too. They hope to return to London for its own Marathon, which happens in April. Annie said:

“I’ve run my hometown Marathon and that was a cool experience because you know the route first-hand. Having lived in London, I think running the London Marathon would have the same feeling.”

We look forward to welcoming the students back to their home from home in London, and we wish them all the best with their running endeavors!