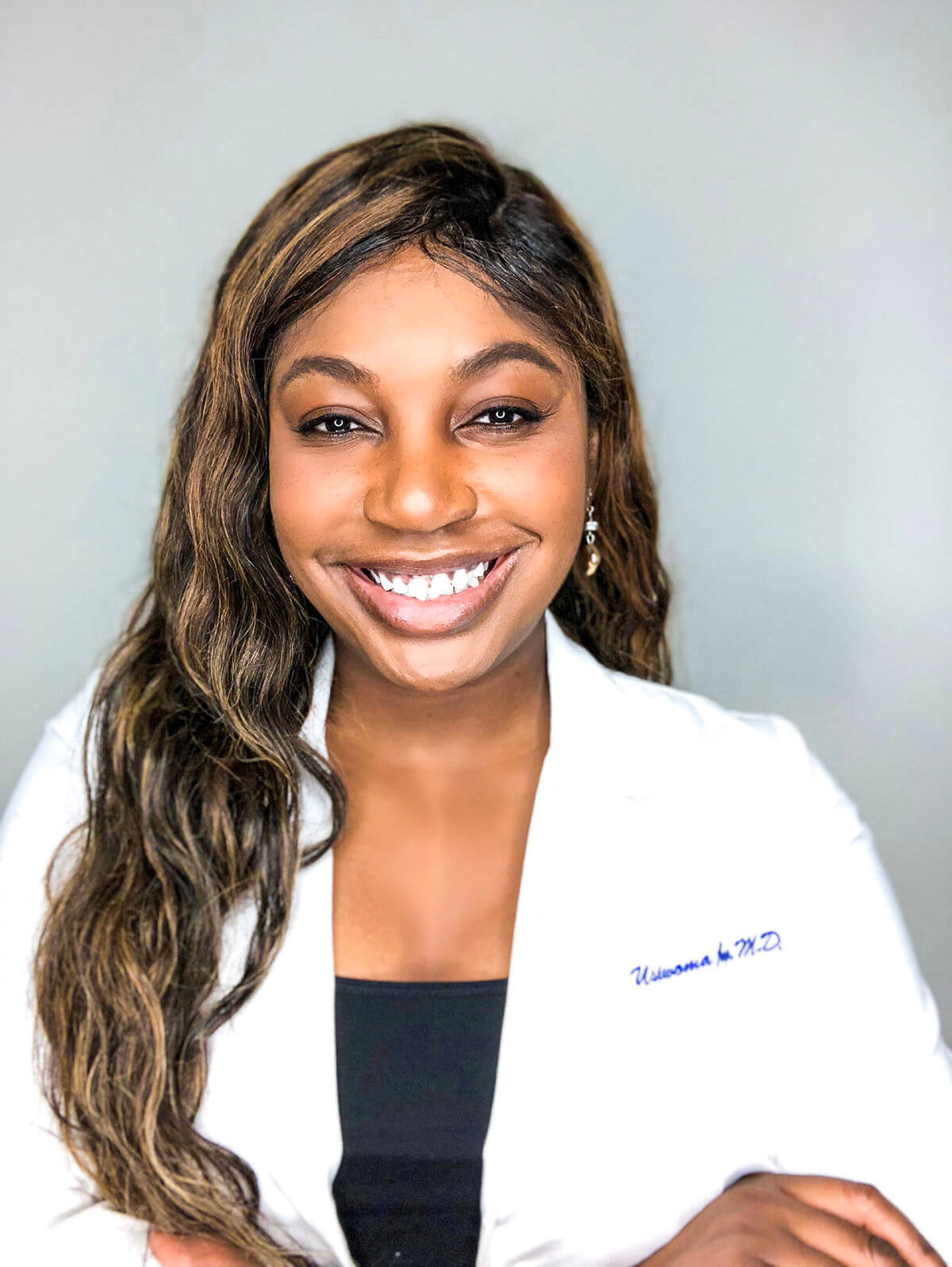 Usiwoma Abugo ‘08 is probably the only oculoplastic surgeon who is instafamous. With nearly 17,000 followers, Abugo provides mentoring to medical students through various social platforms to help them achieve their medical goals. She decided she wanted to be a doctor when she was ten years old, and since then has been driven to succeed in her career and to help others progress in theirs. Her time at the London Global Gateway shifted her focus, and instead of learning about medicine, she spent time learning about herself.

“The London experience taught me how not to lose myself in my desire to serve others,” remembers Abugo. “That’s been one of the most helpful things in my medical career.”

Home away from home

Many students want to go Notre Dame because of the opportunity to study abroad, and this was the case for Abugo, although her reasons for choosing London were different from her classmates’.

“I have some relatives that live in London, and I didn’t have the chance to get to know any of my relatives growing up,” says Abugo.

Abugo was born in Nigeria and her family moved to the U.S. very early on in her life, meaning there were huge parts of her family that she rarely saw, or had never even met. Studying in London stood out to her, not just because it is one of the world’s most exciting cities, but also because it offered her the chance to discover a part of herself that she hadn’t been able to access before. 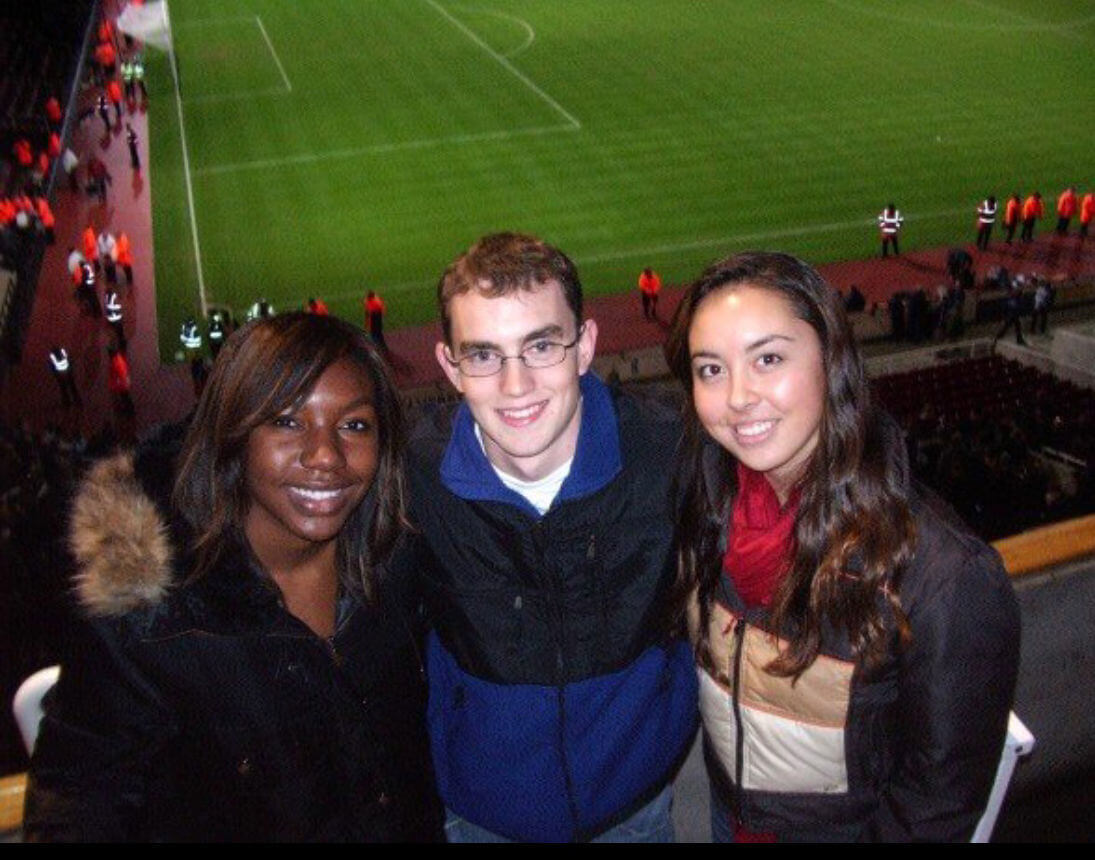 Abugo and friends at a West Ham vs Manchester United match

She left behind her fellow students in central London to spent time with her extended family, who lived in different areas of London. They shared their lives with her when she visited, and she learned a lot, not only about her London-based family, but also about her family back in Nigeria. There is a strong Nigerian community in London that Abugo felt more connected to through her family, and she was able to see London through a new lens.

“It was such a different perspective!” remembers Abugo, “My uncles lived in very different areas of London, so I was able to see more of true London life.”

When Abugo was with her family, she was able to escape the Notre Dame bubble and see how people in the city really lived. They took her to their local neighborhoods and high streets where they shopped to get groceries and Abugo got a glimpse into the day to day life of a Londoner. Even when she wasn’t with them, having family in the city gave her a security blanket, allowing her to be more adventurous with the places she visited and the things she did. 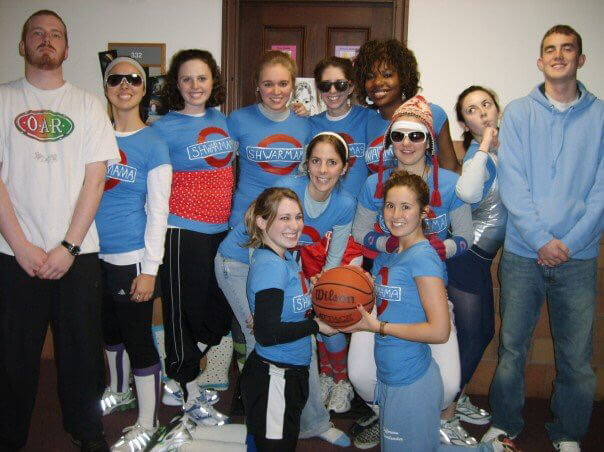 Abugo's basketball Team with her London flatmates, who called themselves the Shwarmamas.

The Nigerian community is one thread of an incredibly rich tapestry of cultures and history in London, which is known as one of the most diverse cities in the world. Abugo was struck by this seemingly limitless amount of culture at her fingertips in London. Whether it was art, music, people, or food, she was almost overwhelmed by the variety offered.

“There is just so much more cultural diversity readily available,” says Abugo. “After class you could just go and get shawarma or Doner kebab. I don’t think I’ve ever had any shawarma quite as good as I had when I was in London!”

As an American, Abugo quickly learned what it was like to be in the cultural minority, and had her eyes opened to the fact that American values were not necessarily shared across the world. After the initial culture shock of this, Abugo became excited by meeting others who held different views, ideas and beliefs, and was able to learn a huge amount about the world through interactions with local faculty, people in a pub, or even those she met on the street.

As well as the instructive and profound side to London life, there were also some elements of London culture that were just fun to experience for Abugo. As a “football” fan, she got a big kick out of going to see matches between Manchester United and Tottenham, where people were just as excited as she was. She’d walk past Trafalgar Square and be awestruck by the history of the architecture, or she’d look out for celebrities shopping at the designer boutiques that line Bond street. The whole city buzzed with activity and excitement.

“It’s just this cultural and social epicenter of the world,” reflects Abugo. 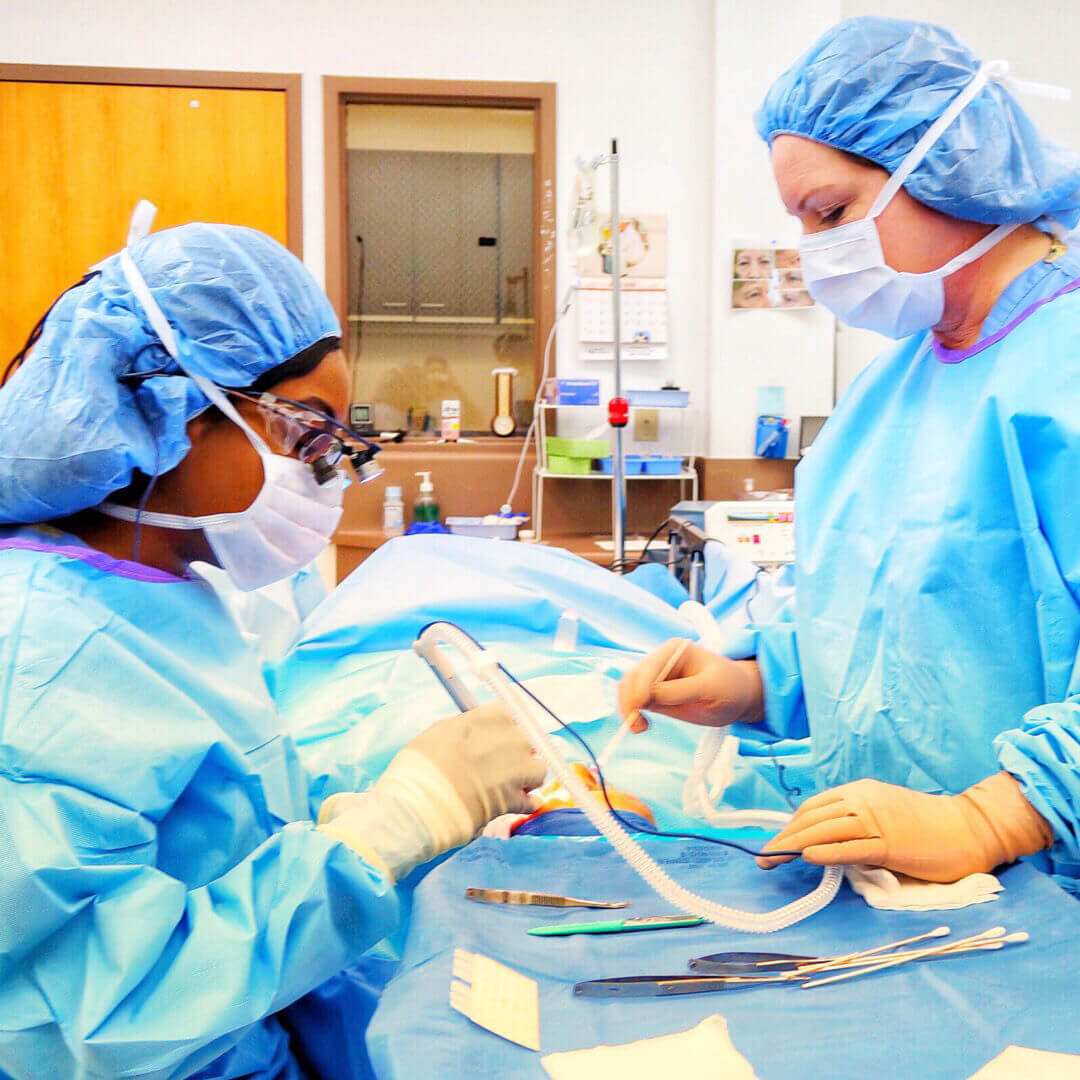 Abugo in the operating theatre

Spending a semester abroad allows students to become more independent. They are dropped into a world where life is different, and the support networks are deliberately not as robust as they might be on campus, giving students a taste of what it means to be a global citizen. Students learn so much about the world, and in doing this they inevitably learn a lot about themselves. Abugo points to her experience in London as a pivotal time in her development as an adult and as a person.

“London forced me to grow up and realize who I was,” states Abugo. “I was a person outside of familial comfort and being in the London community meant we all sort of grew up together.”

Being placed in a different environment meant that Abugo had to learn how to shop for herself, how to budget, how to appreciate different culture and perhaps most importantly, how to get yourself out of sticky situations. Abugo has a vivid memory of the first time she truly had to fend for herself.

“I was partially stranded in Italy because I booked my flight for the wrong day,” laughs Abugo. "I had to figure out, and I didn’t speak Italian, how to get from Rome to Venice.”

Although not necessarily the most enjoyable experience at the time, Abugo now looks back with fondness on this memory, as a time when she realized that she was resilient, and capable of fending for herself.

“You don’t have those experiences unless you study abroad,” says Abugo. “You can’t be afraid to get lost.”

In forcing her to focus on growing up, Abugo had to turn her attention away from her career and from the service of others. In doing this, she was able to become a more rounded, more resilient woman who had a better understanding of what she wanted from life.

“People sacrifice a lot to serve others and sometimes you have to remember that you’re a person too,” smiles Abugo. “I don’t think I would have learned that without the London experience.” 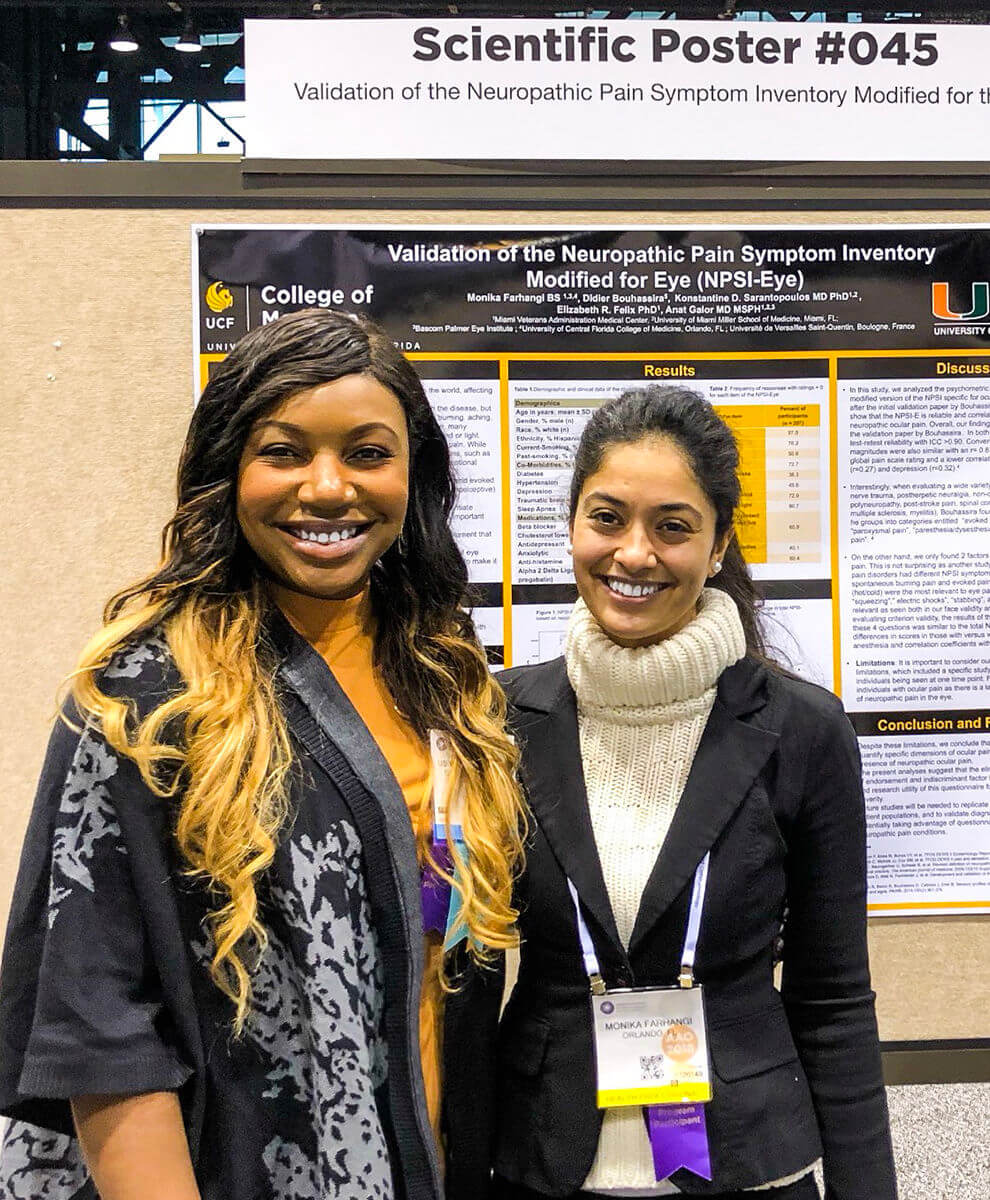 Teaching youself, by teaching others

After learning about herself in London, Abugo felt able to contribute to the lives of others through her career. This was reflected in her choice of ophthalmology as a medical specialty, which she picked due to the substantial effects she could have on her patients’ lives. However, becoming an ophthalmologist had its challenges.

“Ophthalmology is pretty competitive, and me being a minority made it even harder,” reflects Abugo.

Luckily, after reaching out to a faculty member, Abugo was directed to a woman who became her mentor throughout her entire career. She guided Abugo through her medical training and gave her invaluable pieces of advice that enabled her to succeed in the field. It was also this woman that eventually led Abugo to become a mentor herself.

Today, Abugo spends a huge amount of her spare time mentoring students, both through the National Medical Association and through social media. Her phone constantly buzzes with messages from aspiring doctors who want her advice or help, and she makes sure she responds, often giving out her number so that they talk on the phone.

“It’s pretty exhausting at times, but it is incredibly rewarding when I get messages or calls saying they’ve been accepted at a conference, or are speaking somewhere, or they got into medical school,” says Abugo. “It just reminds me I’m that person that I didn’t initially have when I was in medical school.”

Abugo’s story is certainly inspirational, and she believes that her background is the reason that minority students feel comfortable with her and encouraged to continue on their chosen path.

“There are a lot of students that came from disadvantaged backgrounds like I came from and it’s encouraging for them to see that if I can make it, they can make it too,” says Abugo.

Abugo is willing to share her life with those that she mentors, and it is this warmth and personal connection that make her such a fantastic role model and mentor. It’s also one of the reasons she feels compelled to use social media as her means of reaching out, sharing posts of her history, her story, along with her successes and failures.

“I like to remind people that we’re all human; we all fail, we all struggle, and we all have challenges,” states Abugo. “When we humanize medicine and we humanize doctors it allows people to actually reach you.”

The reason Abugo feels comfortable sharing such personal elements of her life with her followers and mentees, is that she is sure of who she is. Her drive to help others succeed is due to her generosity of spirit, maturity and confidence; attributes she developed during her time studying in London. 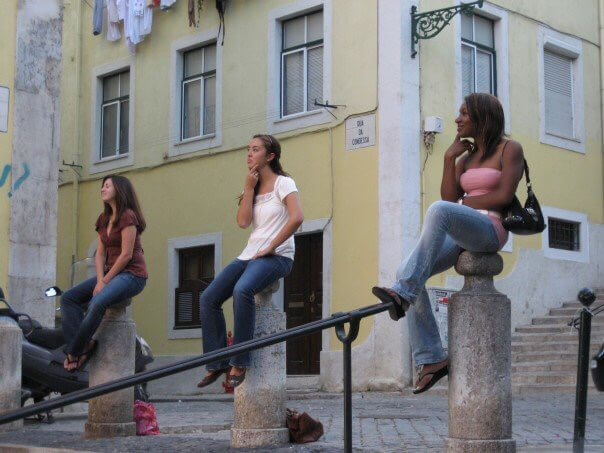 Abugo on a trip to Portugal during her semester in London

Find out more about Abugo by checking out her website, where she mixes design, stories, photography and medicine to reach out to aspiring young doctors. You can also become one of her many followers on instagram @mentormemd.