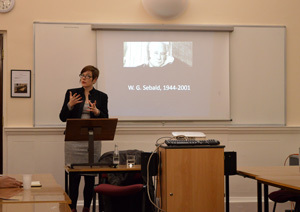 On Thursday, November 20, 2014, Dr. Helen Finch (University of Leeds) gave a talk on the German author, W. G. Sebald, and the effect his writing had in literature, particularly on the topic of the Holocaust. The lecture, which took place at the University of Notre Dame London Global Gateway, was organized and introduced by visiting professor of German Tobias Boes (University of Notre Dame), who described Dr. Finch as a “rising star” in the field of German Studies. Her work focuses primarily on post-1945 German literature, specifically testimonial literature and the Holocaust, although she has also written on post-Apartheid South Africa. Finch’s recent publications include Sebald’s Bachelors: Queer Resistance and the Unconforming Life (2013), and Witnessing, Memory, Poetics with Lynn Wolff (2014).

Dr. Finch began her lecture W. G. Sebald’s Literary Capital: The Sebald Effect in Holocaust Literature? with an overview of Sebald’s rise to fame, which is more prominent now than ever among his literary fans, helped by the translation of much of his writing into English. She then posed the questions: how did Sebald achieve this fame? Why have his works brought about a new age in Holocaust literature? How did he manage to construct cultural capital? How does he serve as a paternal model for new writers?

To begin her analysis, Finch discussed the move in literature from testimony to meta-testimony, that is, people reflecting on events like the Holocaust without having experienced them first-hand. She then turned to author H. G. Adler who Sebald referenced often in works such as Austerlitz. Sebald refers to Adler’s writing as “obscure” but his epically long reference to Adler’s description of Theresienstadt in Austerlitz gave his own writing moral authenticity and promoted Adler and his works.  Finch also pointed out the transnational links between Adler and Sebald including their exile and displacement from their home countries, complicating their positions within cultural memory.

The focus of the talk then turned to models of memory and the way people remember things. Finch mentioned the theory of “place of memory” and national memory, where things are remembered in certain places. She argued this was not the case after the Holocaust because of the erasure or exile of places, so memory became more dynamic. She also said that memories were mediated and remediated – memories do not stay remembered and what is forgotten does not stay forgotten – and insisted that media play an important role in articulating memories. 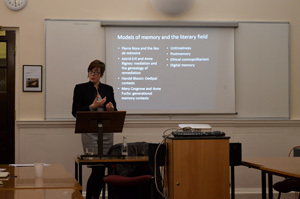 Finch also discussed generational memory contests (remembering what was silenced by previous generations), and ethical cosmopolitanism. Sebald promoted this concept by collecting stories from around Europe for Austerlitz and rejecting his German first name. It was this, she claimed, that also influenced “Sebald’s sons,” authors like Teju Cole and Will Self.  In relation to these authors, who like Sebald, write about historical trauma and its aftermath, and strive to bring about positive moral change, Dr. Finch turned the discussion to digital memory and bringing Sebald’s work, and therefore Holocaust memory, to light through digital media such as blogs. Finally, Finch touched upon photography in Sebald’s works and how they can disprove text and reveal the unreliability of digital memory.

Dr. Finch concluded that Sebaldian-style literature, which brings together all aspects or considerations of memory, was necessary. She reiterated that Sebald’s work opened up new possibilities in contemporary literature.

Notre Dame students, staff, and faculty, as well as several outside guests attended the lecture.  Tobias Boes said, “W.G. Sebald has been a hugely popular and immensely discussed author for over ten years now, and I thought Professor Finch did a great job showing us why he’s likely to remain an influential writer for at least as long in the future. I was also happy to see the many connections between this event and our earlier lectures on the cultural memory of the Great War.”

View photos from the lecture on our Facebook page.

Originally published by Emily Grassby at international.nd.edu on November 25, 2014.