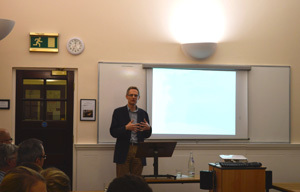 On Thursday, November 6, 2014, Professor Jonathan Long (Durham University) gave the last talk in a series of First World War lectures organized by Professor Tobias Boes at the London Global Gateway.  Professor Long is a faculty member of the School of Modern Languages and Cultures at Durham University, as well as the co-director for the Centre for Visual Arts and Culture, and co-founder of the Durham Centre for Advanced Photography Studies.  He specializes in twentieth and twenty-first-century German literature, and is currently working on several photography projects.

Professor Long set the scene of his talk by contrasting the short fourteen-year existence of the Weimar Republic (1918-33), and its grave economic and political situation, with its cultural innovation and creativity, establishing a highly influential arts scene and legacy.  He then introduced the concept of cultural memory (defined as collective and external, rather than individual), and then went on to ask whether the cultural memory of World War One in 1920s Germany had an “internationalist and unifying dimension”.

To consider this question, Long examined Jan Assmann’s notion that communicative memory, that is recounting experiences, becomes cultural memory once the first generation ceases to exist, and this second form of memory is kept alive by practices and rituals such as commemorations.  Long argued that memory is not always communicable and the two types of memory do not depend on each other.  He also used the Weimar Republic as proof that cultural memory does not equal social stability as Assmann believed.

As he began to examine specific photographic works, Professor Long focused on the body of the soldier and its significance as a site for memory contest.  His first piece was John Heartfield’s Nach zehn Jahren: Väter und Söhne, 1924, which he explained represented the “authoritarian militarist ethos” that continued in post-war Germany and mass anonymous death.  He also discussed the ideas of death, corpses, and army life as synonymous, as well the idea of fathers, sons, absence, and state patriarchy in the photomontage.  Long claimed that in this case, the photo aimed to counteract forgetting in a pacifist manner.

Long’s second investigation was of Ernst Friedrich’s Anti War Museum and photographic book War Against War.  Friedrich was a pacifist activist who strived for world peace through exhibitions, lectures, rallies, and international peace camps, also in an attempt to counteract forgetting.  The artifacts in the museum and photos in his book included facial disfigurements, which were absent from cultural representation or on the streets of Germany.  He used them as objects of identification to prove that the wounds of history could not be healed.  Long continued this discussion through Winfred Menninghaus’ theories of the aesthetics of disgust.

Finally, Professor Long turned to look at Ernst Jünger, a protagonist in the Conservative Revolution in the Weimar Republic, who dominated cultural memory.  He tried to give meaning to the lost war through his works, focusing on imagery of technology and weapons, dead horses, and returning to the “intact” appearance of the body, thus neutralizing Friedrich’s bodies.

Professor Long concluded that cultural memory was not a stabilizing factor in society and that the differing ideas about how to remember the war in the Weimar Republic can be traced through the history of photography.  He closed his lecture with a final, unexpected photo of The Experimental House from the Bauhaus.  The design was a house to aid human wellbeing and hygiene, which represented building a rejuvenated collective spirit and mass regeneration, a far cry from memories of defeat, death and battlefields.  Long explained that forward-looking images were beginning to emerge from the Weimar Republic.

Notre Dame students and faculty members, as well as members of the general public and academics attended the lecture.  London Undergraduate Program student McKenzie Hightower said, “The Photographic Legacy of the First World War was a unique way to look at the immediate and lasting effects of the war, because the lecture really highlighted three divergent approaches that photography took: condemning the war through graphic imagery, strengthening nationalist sentiment through showing off powerful new technology, and responding more artistically through avant-garde images with a lot of symbology. I really got a good sense of the scope of these three main points that Professor Jonathan Long tried to emphasize and am glad that I was able to attend!”

To view more photos from this lecture, please go to our Facebook page.

Originally published by Emily Grassby at international.nd.edu on November 12, 2014.