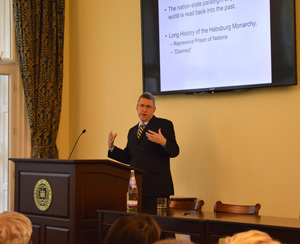 On Thursday, September 11, John Deak, Assistant Professor of History at the University of Notre Dame, gave a talk at the London Global Gateway based on his specialty, and the topic of his forthcoming book, the Habsburg Empire. Tobias Boes, Associate Professor of German at Notre Dame, and resident visiting faculty member at the London Global Gateway, organized the talk in conjunction with his class, Remembering the Great War.

Professor Deak set the scene with a map of Europe in 1914 and the “familiar narrative” of the First World War.  He gave an overview of the assassination of Archduke Franz Ferdinand and the July crisis that followed, widely known as what set the war in motion.  Through revising and challenging these narratives, Deak aimed to look beneath the surface of Habsburg Empire and the First World War to consider forgotten facts, and encourage historical mindfulness.  To illustrate the relationship between remembering, forgetting, and writing history, Deak used the Notre Dame saying “God, Country, Notre Dame”.  He described how nowadays, many do not know the origin of these words inscribed above the East entrance to the Basilica of the Sacred Heart – a memorial for those who served in the First World War – and recognize it only as part of the University’s national image, related to sports and athletics.  His point: history is always written with a selective memory, and facts become surrounded by new stories.

He then turned to the subject of the Habsburg Empire and presented Austria-Hungary as a complicated country of multiple languages, nationalities, and governors.  He talked about the complications that arose within the Habsburg Monarchy when Franz Ferdinand became heir to the throne and married beneath him, how the assassination of the Archduke and his wife came to pass, and how in his absence during war discussions, there was only one other representative in favor of peace.

This prompted Deak to question why we don’t know what happened in the Habsburg Empire after 1914, something rarely discussed in depth in history books.  He presented the popular idea that the Empire was too weak when it entered the war and was, therefore, doomed, something historian Robert Kann described as a fulfillment of a long-term “disintegration process”.  Related to this is the thesis of the Empire as a “prison of nations,” an obsolete political entity that was eventually torn apart by the aspirations towards independence of the various peoples that lived within it. However, Deak also offered a different narrative by recent historians, who paint the Empire as vibrant and regard the War as a cataclysmic event that put an unexpected end to a state that might otherwise have continued to exist for a long time.  The Habsburg Empire, Deak explained, is oversimplified and there are other stories also covered up by the general, familiar narrative.

Professor Deak then moved on to talk about new approaches to the years before the First World War, examining national indifference towards identity and language, political deal-making and cooperation within the Empire, local politics as multinational and cooperative, and the loyalty of the people.  He deduced that the Monarchy was indeed more vibrant than it has been portrayed, and even though it fell as a result of losing the war, it fulfilled all its pre-war objectives. 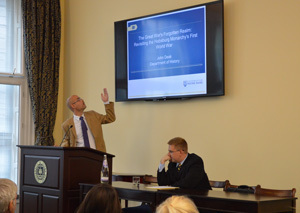 The talk was attended by students and faculty of the London Global Gateway’s Undergraduate Program, Notre Dame alumni, and members of the general public, including academics from London institutions and the University of Nottingham.

Keith Surridge, Professor of History at the London Global Gateway said, “John Deak persuasively argued that the Austro-Hungarian Empire was not a moribund force before the First World War and that, in fact, it had achieved its military objectives by 1918, although with a slight nod towards German help!”  Tobias Boes added, “The Habsburg Empire lives on in popular memory largely as a farcical state that was finally put out of its misery by the modern horrors of the First World War. But actual history rarely proceeds by smooth punch lines. John Deak deserves a lot of credit for bringing the monarchy back to life before our eyes in all its contradiction and complexity.”

Originally published by Emily Grassby at international.nd.edu on September 15, 2014.