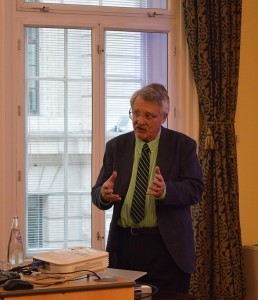 On April 2, 2014, Alan Powers (author of The Worlds of Giordano Bruno) spoke at the University of Notre Dame London Global Gateway.  The event was organized and hosted by Felipe Fernández-Armesto.

In his lecture, entitled Literature and Science in the Play and Poetry of Giordano Bruno, Powers focused on his translation of Bruno’s play Candelaio.  He discussed themes of science, magic, humor, adultery, satire, and parody in the play, as well as representations of the characters, and the three plots in the story.  He also talked about different interpretations of Candelaio on stage, including the “doomed” version in 1980s London.

In addition, Powers gave accounts of Bruno’s life, studies, and travels around Europe, his relationship and conflicts with philosophers and, in particular, his debt to Ficino (whom his Oxford University debating-adversary, Dr Underhill, accused Bruno of plagiarizing, and whom, Powers argued, Bruno paraphrased in an ironic passage of Candelaio on platonic love).  Some of Powers’ slides illustrated approaches to Bruno in Italy, from the misrepresentation of him in statues, to the sometimes-oblique strategies of Brunotisti, leaders in the Republic of Italy who were scholars of Bruno.  Powers drew attention to what he claimed were the Neapolitan roots of the humor in Candelaio, and Bruno’s audacity in literature and science (where he advocated Copernicanism and re-imagined the cosmos).

The talk was followed by a Q&A session, in which comparisons were made between the works of Bruno and Shakespeare, and Powers considered the influence of Bruno on later authors such as Milton and Coleridge.

Guests included staff, faculty, and students from the London Undergraduate Program, experts on Bruno, and friends and family of the speaker.  About the lecture, student Brian Stahl said, “I was unfamiliar with Bruno, and so I couldn’t contribute to the discussion… but I really enjoyed Alan Powers.  Before the talk, Professor Fernandez-Armesto told me that he was “completely eccentric, but brilliant” and I wasn’t disappointed in that regard.”  Felipe Fernández-Armesto added, “It’s a treat to find a scholar like Alan Powers, who can match Bruno’s range of sympathies, defiance of convention, inventiveness, and unpredictability.”

Originally published by Emily Grassby at international.nd.edu on April 03, 2014.