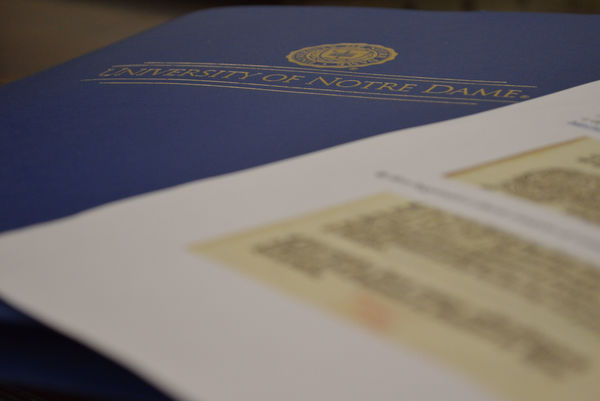 Three medievalist scholars presented a range of papers on medieval women and religious writings during the Holy Water and Saintly Ink seminar at the London Global Gateway on November 24.

Leanne MacDonald and Marjorie Harrington – both doctoral students from the University of Notre Dame College of Arts and Letters, and graduate fellows at the London Global Gateway – organized the seminar, while Hetta Howes of the Queen Mary University of London School of English and Drama was also invited to talk.

“The seminar was a great way to connect with the London academic community, and present work to an audience outside of my immediate scholarly community,” MacDonald said.

MacDonald opened proceedings with her presentation, which offered an insight into interpretations of gender identity in medieval writings about Saint Eugenia of Rome. After the seminar, MacDonald pointed out that her paper was largely made possible through access to unique academic resources available in London.

“The paper I gave at the seminar was based on manuscript research that I have carried out this semester while I have been staying in London with access to The British Library, so it was nice to be able to show off some of the results of what I’ve been working on.”

Harrington’s presentation focused on language and identity in The Book of Margery Kempe – considered by some to be the English language’s first autobiography – and made great use of The British Library’s digitized version of the text.

“The seminar brought together a diverse group of scholars and non-specialists. Presenting a paper to an audience with such wide-ranging backgrounds and degrees of interest in medieval literature led me to re-conceptualize my research in order to formulate just what is so compelling about The Book of Margery Kempe," Harrington said.

Howes closed the event with her talk, entitled Bathing and Immersion: water and blurred boundaries in The Doctrine of the Hert, in which she analyzed the significance of water imagery utilized throughout a range of historical texts.

Each of the speakers fielded questions from the audience at the end of their talks, and Harrington said that part of the seminar proved to be particularly helpful.

“Seeing how the audience reacted to the divisive figure of Margery was an especially valuable opportunity for me because this is a text I will teach to students regularly,” Harrington said.

Warren J. von Eschenbach, academic director of the London Global Gateway, attended the seminar and said he was pleased to hear that Notre Dame students were able to broaden their research capacity by accessing London resources.

“This was an insightful seminar and I’m particularly delighted to see that resources available here in the U.K. have been able to add a new dimension to the research and scholarship being conducted by London Global Gateway Graduate Fellows.”

Originally published by Dean Benson at international.nd.edu on November 26, 2015.