The LUP is pleased to announce the winner of our Fall 2013 London past and present photo contest: Graham Englert with Towers Through Time. 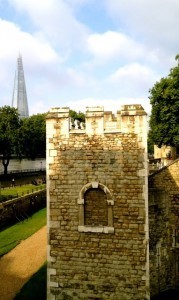 Graham writes:
“I decided to take this photo during a morning run because it captures two unique time periods of London’s History. The Shard and the Tower of London were built almost 1000 years apart for different purposes. They also exhibit a stunning contrast in architectural styles. What they have in common, however, is that they both have stood above the other buildings of their time period. Although different, both towers represent the longevity of the innovative spirit of London.
After returning back to my flat, I noticed the Thames flowing through the picture adds much to the photo’s meaning. As a river that has been present for the entirety of London’s history, it represents that the core innovative values of London have remained strong despite the passage of time. I also like how the Thames flows between the towers just as time divides the periods in which they were built."
We had three photos tied in the voting, and had to recruit an additional tie-break judge, and so decided to award “highly commended” prizes to the two close seconds.
Kate Privateer, with Ships and Shards and Carolyn Hutyra with A moment in time. 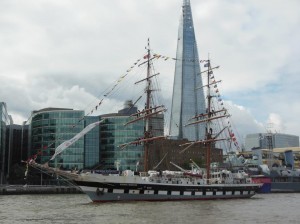 “The Thames River has been a defining aspect of London’s history from the age of wooden masted ships to the time of glass skyscrapers. I chose this picture, which was taken from the river, for the way it shows how the city and river have been interconnected since London’s creation.” 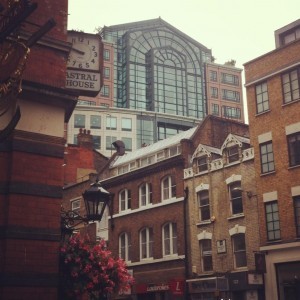 Carolyn writes:
“This photo was taken in the East End. Not only does the clock capture the exact moment the photo was taken, but the picture showcases the beautiful intermingling of both old and new architecture.”
This was an extremely hard contest to judge with a great pool of entries, so congratulations to our winners, and thank you to all our entrants!

Originally published by Emily Grassby at international.nd.edu on October 04, 2013.