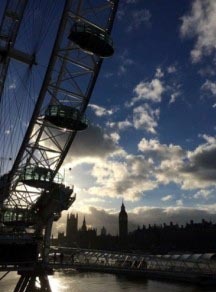 Big congratulations to Colby Hoyer who is this semester’s winner of the Inside London Photo Contest, with her composition Eye on the Bright Blue Sky.

Judged by the London Undergraduate Program staff, including Director Warren von Eschenbach and Director of Student Affairs Judy Hutchinson, and University Photographer Matt Cashore, the competition challenged undergraduate students to capture the relationship between London’s past and present on camera.

“I took this photo on the very first day of orientation while we were walking by the London Eye. I was blown away by the fairytale appearance of this amazing city. I couldn’t believe its beauty or how perfectly the bridge in the middle of the photo linked the Modern London Eye and the 11th century House of Parliament. Both of these structures have become icons of the city of London, a testimony to the combination of rich history and modern achievements that make London what it is today.”

Congratulations also to Matt Zajac and Justin Chen for their contributions Squeezed Cathedral (Zajac), Southwark Cathedral and the Shard (Zajac), and Toward Modernity (Chen), which all received Highly Commended.

Thanks and well done to all the students who entered the competition.

Originally published by Emily Grassby at international.nd.edu on February 18, 2014.