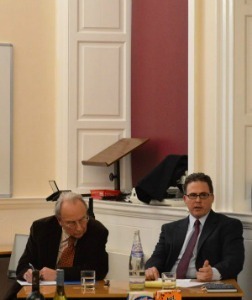 The sixth annual Global History Seminar Series took place at the London Global Gateway from February to April 2015.  Sponsored by the University of Notre Dame and the Institute of Historical Research, in collaboration with the University of Oxford Centre for Global History, the series brings together experts in world history to discuss and debate cultural, religious, political, and social issues.

This year’s seminar topics included the history of psychological professions and brainwashing during the Cold War, maritime history (focusing on the Mediterranean and China), the Middle Ages and the concept of ‘the medieval’, and the wider histories of civilizations and societies in Europe and the world. 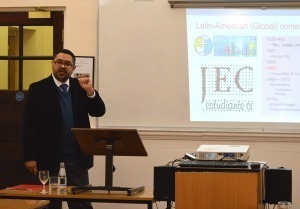 Co-organizer of the seminar series, Felipe Fernández-Armesto (Notre Dame), said, “The IHR Global History Seminar is the UK’s longest-standing Global History programme. This year, we have offered the most ambitious series ever, bringing leading practitioners from Germany, the Netherlands, Italy, and the U.S. to London, hosting genuinely interdisciplinary panels, with some of Britain’s most admired scholars and public intellectuals.  As the number of university courses in Global History multiplies in London our seminar promises to be a fundamental resource for growing numbers of teachers, students, and researchers.”
Full details of the series sessions can be found on the London Global Gateway website.  For photos, visit our Facebook page, or for videos, our YouTube channel.

Originally published by Emily Grassby at international.nd.edu on April 21, 2015.