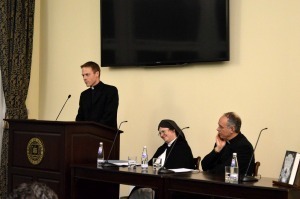 On Tuesday, November 25, 2014 a book launch and panel discussion was held at the London Global Gateway. Basil Moreau: Essential Writings is a new anthology of published and unpublished letters by Blessed Basil Moreau, C.S.C., edited by Kevin Grove, C.S.C., and Andrew Gawrych, C.S.C. The panel discussion focused on the impact that Moreau had on the worldwide Church, presented by Father Grove, a Gates Cambridge Scholar and assistant chaplain at Cambridge University, Monsignor Mark Langham, the chaplain of Cambridge University Catholic Chaplaincy, and Sister Ann Swailes, a Dominican nun, lecturer at Oxford University, and assistant chaplain of Cambridge University Catholic Chaplaincy.

In his speech, Fr. Grove discussed Moreau’s upbringing in post-revolutionary France and the influences it had on his future endeavors, his legacy as a religious priest, and the challenges that the Congregation of the Holy Cross encountered as it expanded internationally. Mgr. Langham continued the conversation, sharing his thoughts on Moreau’s legacy in the context of the wider Church. He examined the conflicts between Moreau’s diocesan training and his desire to work abroad, and considered his model of unity in the global Church. Finally, Sr Swailes discussed Moreau’s quest to be like Christ, compared his life to that of Sr. Margaret Hallahan, founder of the Dominican Congregation of St. Catherine of Siena, and considered the gifts Moreau left to the Church today.

“For most of us at Notre Dame the dominant figure in the history of the University is Fr. Edward Sorin, and with good reason as he was a man of incredible vision, a powerful will, and remarkable achievement,” said Warren von Eschenbach, academic director of the London Global Gateway. “As a consequence, however, perhaps less is known and appreciated about the founder of the Congregation, Blessed Basil Moreau, and his spiritual writings that help inform the charism of Holy Cross. That is why it was such a special honor for us at the Notre Dame London Global Gateway to celebrate this important contribution toward greater understanding of Moreau and his animating vision.”

Originally published by Emily Grassby at international.nd.edu on December 04, 2014.