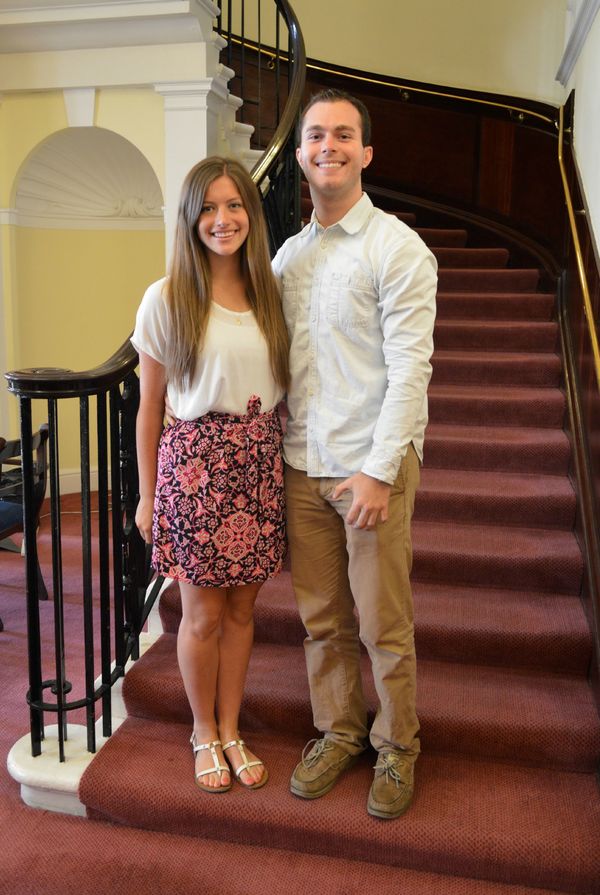 The Department of Chemical and Biomolecular Engineering works with the London Global Gateway to offer rising juniors the chance to spend six weeks living and studying at Imperial College London.  This means that engineering undergrads have the opportunity to work with Imperial’s fully functioning carbon capture pilot plant, experience firsthand the engineering advancements of other countries, and gain understanding of social concerns around the world—and the connection between those concerns and their role as engineers.

This summer, 28 students participated in the program.  Marissa Martinez from Seattle, Washington, and Daniel Quigley from Mahopac, New York, both CBE majors (class of 2017), offered their thoughts on the experience.

Q: What do you like best about studying abroad at Imperial College London?

M: My favorite part is how small the program is.  I really like the fact that we’re living, taking classes, socializing, and seeing the city with the same group of kids who are all in our major and in the same year.  It’s really nice to be able to connect with people and learn more about them beyond just seeing them in classes.  Heading back to campus, I feel like we’ve developed a really good support network. Similarly, with the Notre Dame professors who have come here with us, we get more one-on-one time, and we go out to dinners with them, so getting to learn about them and getting to know them outside the classroom has been really helpful.

D: Personally, I really enjoy Imperial College itself.  They have state-of-the-art lab facilities that are unlike anything else we would be able to experience in the world, and they also have a pilot plant that is four stories of an actual carbon capture process.  In this sense, in the labs we get to actually apply everything we’ve been learning about for the last two years in school, and in the pilot plant we are exposed to what it is actually like to work in industry. Also, the professors at Imperial College are so engaging, so helpful, and I’ve learned so much over the last six weeks. I know that I’ll be able to take it back with me and apply it in my classes at Notre Dame.

Q: How has your vision of engineering expanded through your time in London?

M: For me it has really opened my eyes just being in different countries of how much engineering impacts basically everything we do in our lives.  A lot of times at home you take for granted how things work and how the road systems are, and you assume that is how it has always been, but when things are a little bit different in a different country you really realize how much conscious engineering decisions impact everything you do.

D: Engineering in London is really interesting because it has been around for hundreds and hundreds of years.  You see it just walking through the streets—buildings that were created in the 14th century and road networks that have been around for so long—so you really get to experience engineering as a whole from the beginning of time.  This isn’t what we’re able to experience in the U.S. because, relative to England, everything in the U.S. is really new. Not only is there a strong engineering past in London, but you can also see its future.  London has state-of-the-art security and transportation systems that are very different from the U.S., so you can see where engineering is going and how in different areas of the world there are different forms of engineering.

Q: What have you learned here that inspires you most moving forward?

M: Personally, I’m inspired because I now know that all the theoretical and bookwork that we’ve done at Notre Dame can assist us in actually doing hands-on work.  In the pilot plant, it was so daunting at first with so many valves and meters, and I had really no clue how to tackle it, but we as a group stepped through it systematically and I feel confident that this framework of working through things can translate into anything that I do.  Now, on the last day, we were able to run the full pilot plant, see how everything worked, and obtain data from it.  I feel more confident that what we’re doing in our classes at school will be able to be translated into useful processes.

D: I agree.  Being here you are really able to get a hands-on experience and it really harvests your learning.  Knowing more now, we are able to see the direction engineering is taking in society and there’s so much opportunity for engineers.  I think that what is so inspiring for me is just to be able to continue with what I’m doing and ultimately discover new things, innovate old things, and really push forward in the world.

Q: What are the advantages of spending time living and studying abroad for your personal and career development?

M: I think it’s so important when interacting with a new culture to first respect what they have already established in their customs and traditions, but also not be afraid to offer what you bring to the table as well.  The concept of respectfully sharing ideas and collaborating will translate into whatever workplace we end up in, because whenever we need to interact with coworkers or new people, it will be important to remember that everything that they are bringing to the table is valid, and we need to respect that, but also have the confidence to share our opinions and ideas as well.

D: I feel that there is oftentimes a cultural insensitivity and lack of cultural exposure among many people.  Sure, people go on vacation and see the world in a recreational sense, but it’s not until you’re actually living in a certain area that you have to completely oblige the customs of different places that you’re unfamiliar with, and that you really develop sensitivity to other people, their customs, and their culture.  In that sense, you create a newfound patience and a respect for other people, which I think is really important moving forward because it translates into your ability to communicate with different people and this is really important in both the workforce and in life.

Q: What advice do you have for younger or prospective engineering students?

M: I think what I’ve learned the most in the two years of being at Notre Dame and in the engineering curriculum is the need to collaborate and work with others.  I know a lot of us at Notre Dame were very high achieving in high school and really excelled in a lot of things that we did there, so for me it has been an adjustment learning that I can’t do everything on my own.  You need to go to professors and work through problems with them, and you need to find study groups and people to help you through homework assignments.  That is OK and necessary.  The sooner you can learn that and seek out the people who are willing to help you—which is really anyone—and have the knowledge that you would like to gain, the more successful you will be and the more enjoyable it will be.

D: I would let them know that nobody said engineering was going to be easy!  It’s extremely difficult, and it’s a very long and hard process.  That being said, it’s rewarding in the sense that you develop skills that you wouldn’t otherwise develop in other majors: a sense of intellectual hard work – I’ve been in the library until 4:00 a.m. working on homework that’s due five hours later, and it’s difficult – a sense of time management, attention to detail, and how processes work as a whole, which really translates into logic and arguments in the real world.  Overall, I think that engineering is one of the most difficult majors but it’s also by far the most rewarding, so go into it knowing there’s a light at the end of the tunnel. Just hang in there and you’ll be ok.

Originally published by Emily Grassby at international.nd.edu on August 07, 2015.