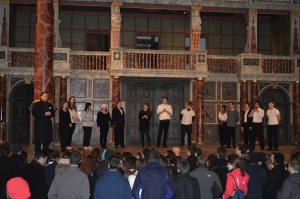 Last week, thirteen Notre Dame students took to the main stage of Shakespeare’s Globe Theatre and performed a selection of acts from Macbeth.  The show closed the Playing Shakespeare course, taught in partnership between the University of Notre Dame and Globe Education at Shakespeare’s Globe, in which the students spent half a semester studying and reviewing Shakespeare plays, and the other half working on the Globe Theatre stage under actor and Globe Education course director  Nick Hutchison.

“In spite of the biting cold, the students from the Playing Shakespeare class gave an inspired performance of the scenes from Macbeth” said Boika Sokolova, one of the Playing Shakespeare professors from Notre Dame.  “All rose to the challenge of the text and acted with confidence and conviction during a memorable half an hour.”

Nick Hutchison also commented “The Notre Dame students at the Globe brought great energy and zest to their performance of scenes from Macbeth; we started the sessions with a group many of whom had little or no acting experience and some of whom were frankly terrified at the thought of appearing on so illustrious a stage. Over the course of a few frenetic weeks they learned to trust the language, and through that, their own abilities, and the result was a show that had great flair, a strong use of the words, and a real commitment to addressing the audience. They learned so much about Shakespeare, about the Globe and about themselves; it was thrilling to be a part of the process.”

Notre Dame students, faculty, and staff attended the performance alongside staff from the Globe, and the evening ended with a reception at Ye Olde London pub.

Originally published by Emily Grassby at international.nd.edu on December 09, 2013.