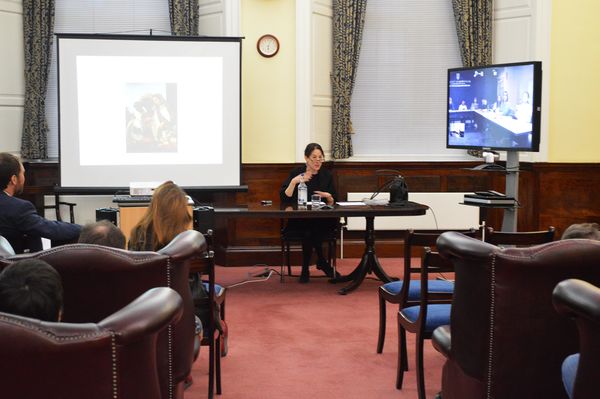 The Sabine McCormack Lectures honor the memory of one of Notre Dame’s most famous and unusual scholars.  Sabine combined unsurpassed knowledge of late antique and early modern history, focussing on Rome and the Andes, and using her exceptional gifts as a humanistic prober of texts and a sensitive wielder of documentary and material evidence to enrich and enliven our understanding of both topics with daring comparisons and startling insights.  It’s a hard act to follow, but Rebecca Earle, in her contribution to the series, on Casta Paintings: Embodying Race, showed that she evinces many of the same qualities and belongs in the same tradition.

Professor Earle delivered the lecture on March 24, 2014, in Fischer Hall at the Notre Dame London Global Gateway, next door to the National Gallery, while an appreciative audience at the university’s home campus was able to enjoy the event by simulcast and take part in the discussion.  Professor Ted Beatty of the History Department introduced the lecture to an audience drawn from Notre Dame and various British universities and research institutes.  The lecturer paid tribute to the honorand’s memory, before turning to her intriguing theme. 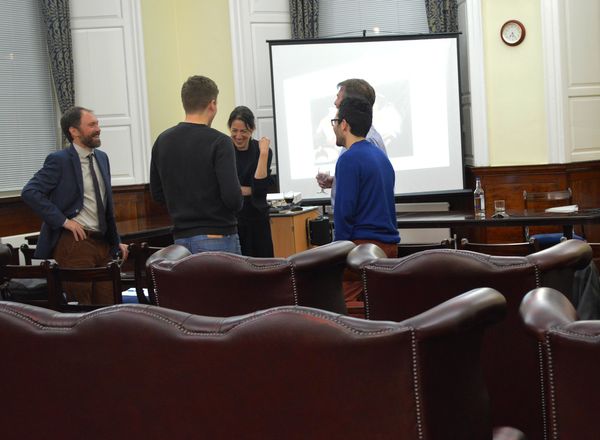 Showing many images of Spanish American families of mixed ethnicities, Rebecca offered an entirely fresh perspective on the hundreds of puzzling paintings from colonial New Spain and Peru that display the diversity of colonial society.  Because no sources tell us whom or what the paintings were for, or anything significant about the processes of commissioning or executing them, scholars’ judgement alone can locate them in contexts that make sense.  Usually, experts either indict the paintings as representative of the pedantic racism of colonial elites, or extol them as celebrations of colonials’ pride in the pluralism of their worlds.  Professor Earle, however, argued that it may be misleading to see them as attempts to represent any version of reality.  They unfold, she suggested, conscious fictions and inventive, romantic stories about ideal ethnic types that rarely existed outside the painters’ and patrons’ imaginations: colonial society not as it was, but as it ought to have been, according to Enlightenment science, in which every pregnancy had a predictable outcome.

Originally published by Emily Grassby at international.nd.edu on April 02, 2014.