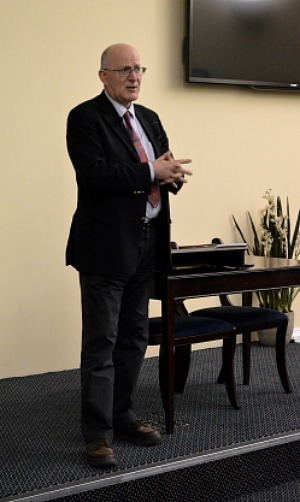 On February 17, 2015, Notre Dame’s London Global Gateway welcomed British historian Jeremy Black (University of Exeter) to Fischer Hall, where he gave an engaging talk on the books and films of James Bond. Black focused on the representation of the cultural nature of the Cold War and the importance of fictional characters to national identity and collective experiences.  “The politics of James Bond relate not just to the specifics of the Cold War but to changing aspects of social history, social custom, political behavior, and the conceptualization of Britain itself,” he said.  Although widely known as a military historian, Black’s book, The Politics of James Bond: From Fleming’s Novels to the Big Screen, has been praised for grounded and to-the-point literary criticism.  When asked about the future of Bond he referred to the unnecessary violence in the more recent films, designed for younger generations.

In his talk to Notre Dame students, faculty, alumni, and friends, Black placed the original James Bond stories in real-life context, recounting political and social hopes and anxieties from the 1950s to the present day.  He analyzed the changes in Bond and the characters surrounding him, and the plausibility of the worlds he enters into, which, he claimed, reflected Fleming’s increasing despair and cynicism both personally and at the world around him.  He also discussed the diversions from the books in their transition to the big screen that were made to appeal to international audiences, and, more recently, to reflect wider issues of gender, sex, race, and class.

“Bringing renowned British academics to the London Global Gateway to have them share their expertise allows our students to broaden their understanding of British culture, society, and history.  Professor Black’s talk gave students the chance to understand the close relationship between history, politics, literature, film, and national identity in Britain, as well as learning more about a character and stories which are quintessentially British”, said Warren von Eschenbach, director of the London Global Gateway.

View more photos from the talk on our Facebook page.

Originally published by Emily Grassby at international.nd.edu on February 24, 2015.