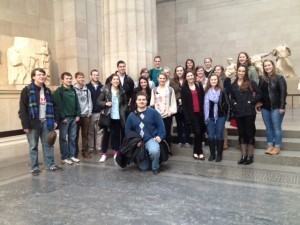 “The Archaeology and Ethics course covers the topics of archaeological ethics; the relationship between archaeology and others (the public, ethnic groups, avocational archaeologists, collectors, etc.); international and national approaches to archaeological heritage management (such as the effects of conflict on heritage); the antiquities market; reburial and repatriation of cultural heritage; issues of identity; the ethics of collecting; plunder; underwater archaeology, and treasure hunting; archaeology as a profession; and archaeological education. We explore these themes in a variety of contexts, including fieldtrips to Bath and Stonehenge, The British Museum (e.g. the Parthenon Marbles, Egyptian Mummies, the Rosetta Stone), The Petrie Museum, The Ashmolean and Pitt Rivers Museums in Oxford etc.

“As part of our studies, we visited the Duveen Gallery in the British Museum, which displays the British Museum collection of marbles from the Parthenon in Athens.  The contested acquisition and ownership of these marbles is a central issue in the topic of archaeology and ethics.  Our field trip marks the start and preparation of ‘The Great Debate’, a role-play debate undertaken by the class, in which they take on the identity of either Greek or UK curators/historians/heritage specialists and attempt to come to an agreement with regard to the future ownership and housing of the marbles.  Always a popular component of the course, the Great Debate offers a great opportunity to get to grips with a complex and fascinating topic and our trip to the museum provides an excellent context in which to start the process.”
Image © Fay Stevens

Originally published by Emily Grassby at international.nd.edu on April 04, 2013.