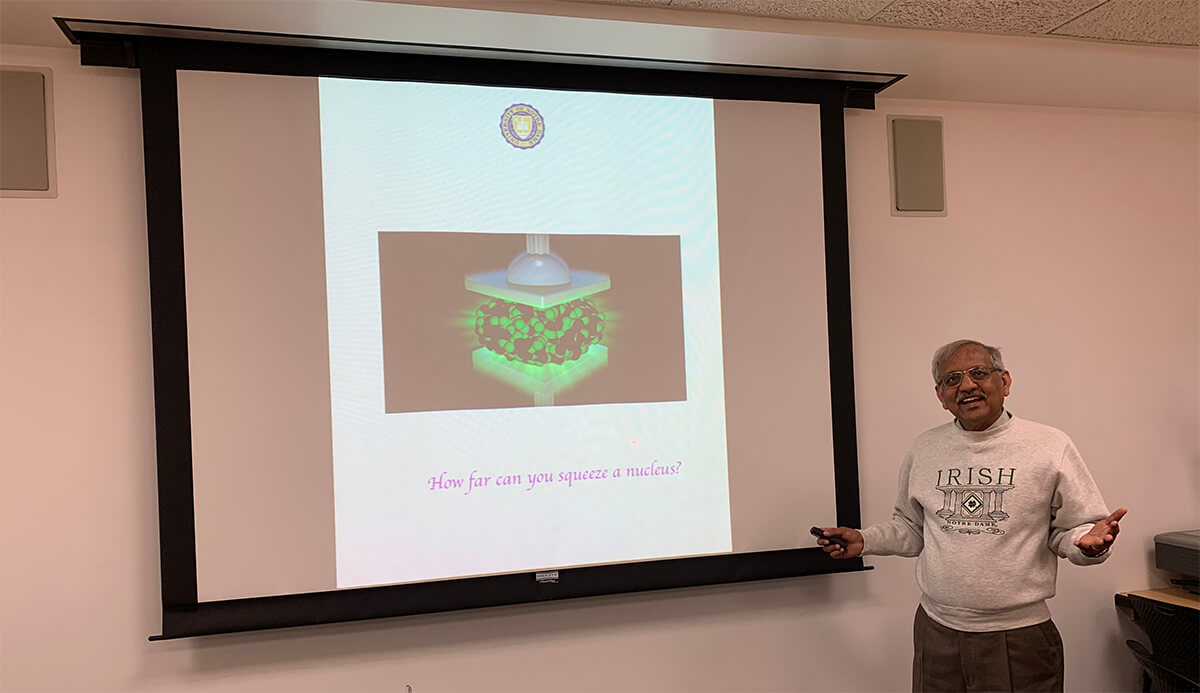 Garg lecturing at Notre Dame in his Fighting Irish sweater

Notre Dame Professor and Nuclear Physicist Umesh Garg spent last semester as a visiting faculty member at the London Global Gateway, and no one could accuse him of taking it easy. In three short months, Garg was invited to give ten talks on his research in five different countries, including Sweden, Italy, and Hungary. The traveling didn’t stop with Europe, he went to a conference in South Africa and even managed to fit an experiment in Japan into his schedule.

Garg is in high demand to give talks on his research, which looks at certain properties of the nucleus, particularly its compressibility.

“I look at how far you can squeeze a nucleus, and you could ask, why does anybody worry about squeezing the poor nucleus?” says Garg. "But it has to do with how a star ends its life."

Garg explains that it takes millions of years for a star to be born, or created, but it dies in a matter of seconds. During the star’s death, the compressibility of the nucleus is one of the parameters that decide whether it continues to collapse in on itself and become a black hole, or whether it explodes to become a supernova. Garg is an experimentalist, and found time as well to travel to Osaka University, Japan to participate in an experiment on investigating this property.

Garg is energetic in spreading the word about his research, and is enthusiastic about spending time in London. He has visited the London Global Gateway several times before, and being able to use it as a springboard to Europe is what draws him back time and time again.

Through these talks, conferences and experiments, Garg raises the profile of Notre Dame and its world class facilities. His collaborations all over the world invariably lead to conversations about what he is doing in London. He uses this opportunity to explain the University, and the existence of ts global gateways and centers. These interactions have led to great things, including a major nuclear physics conference being hosted at the London Global Gateway last semester, and another one, in August 2019. 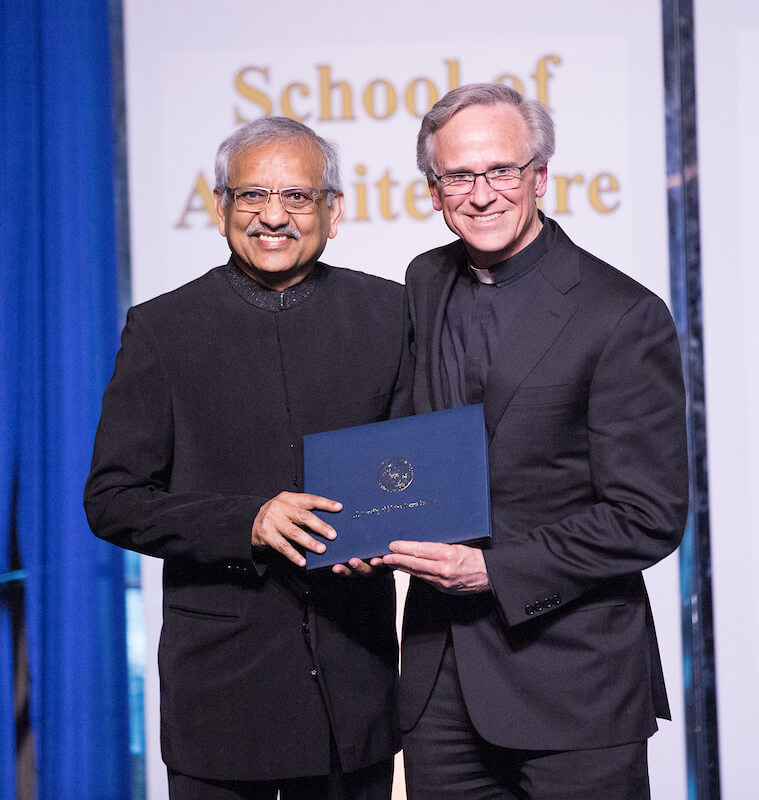 Garg being presented with the Faculty Award 2018

"I typically don’t wear suits and jackets to these talks; I wear the Notre Dame sweatshirt," smiles Garg.

It is easy to see that Garg is proud to represent the University of Notre Dame, particularly the Nuclear Physics Laboratory. There is a long and rich history of active research in this area at Notre Dame, which continues to go from strength to strength. Garg, who joined the faculty in 1982, is influential in both the history and future of the program, although he remains modest in his outlook.

“Notre Dame has a very long and distinguished history in nuclear physics, and I’m part of the long part, if not the distinguished part," jokes Garg.

Although Garg is modest about his position at the University, he has been recognized for his outstanding contribution and service to Notre Dame. In 2018 he was presented with the Faculty Award by Fr John Jenkins, which acknowledged his leadership, dedication to students and contribution to the broader physics community.