The Notre Dame Club of London is a thriving network of alums who pride themselves on keeping the Notre Dame spirit alive 6,000 km away from South Bend. Students at the London Global Gateway are able to take full advantage of the busy schedule of events organized by the club, with game watches, trips and even dinners at alums' homes. Hannah Schwartz, a current undergraduate in London, reflects on the event that has meant the most to her. 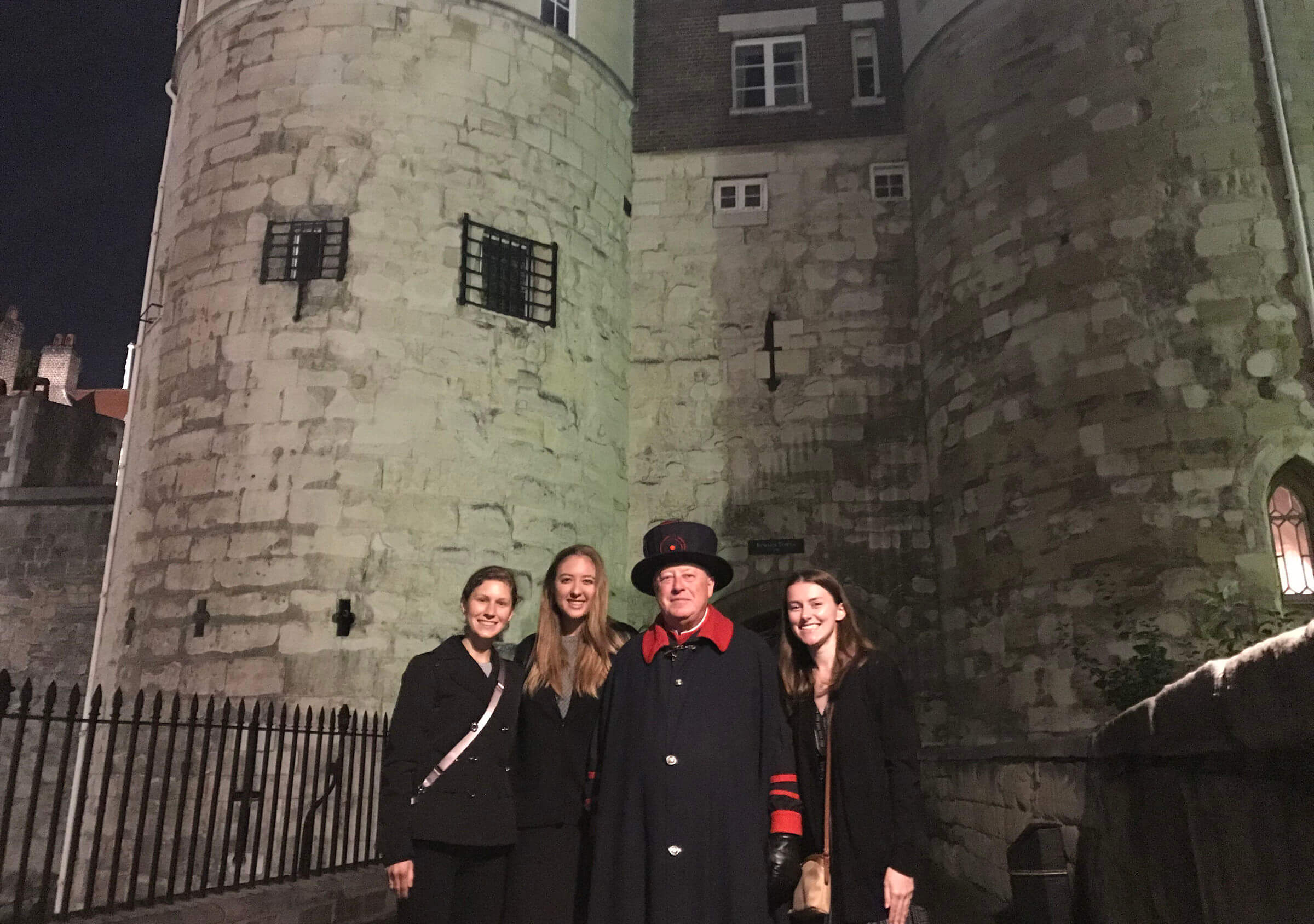 Schwartz and her classmates with the Yeoman Warder

Halfway around the world, the Notre Dame spirit is flourishing in London. Studying at the London Global Gateway has been a tremendous opportunity for me to explore new areas of the world, while still maintaining the supportive and active culture of the South Bend campus. The welcoming feeling that I experience here would certainly not be the same without the passionate alumni club in London. From football game watches to small group dinners at alums' houses, the events that the alumni club organizes are sure to be attended by many students. However, the event that stands out the most for me is the private evening that I spent at the Tower of London.

A Notre Dame alum organized a NATO/US Navy event at the Tower of London and generously offered a few remaining spots to Notre Dame students, one of which I was fortunate enough to claim.

The event began on a Friday evening after the Tower closed to visitors, so we enjoyed the whole grounds to ourselves. Not only that, but I relished the rare opportunity of taking a few photos that don’t simultaneously capture crowds of tourists.

First on our visit, a Yeoman Warder, one of the guards that lives at the Tower, gave us a tour around the various buildings within the tower walls and captivated us with his passionate storytelling and witty remarks. He pointed out Traitor’s Gate, which many notable Tower prisoners such as St. Thomas More entered through. We also marveled at the famous 11th century castle, where numerous kings and queens lived and even the execution spot where beheadings such as Anne Boleyn’s occurred.

Afterwards, he welcomed us into the Yeoman Warder’s Club, an exclusive pub that is not open to the public. Here, we enjoyed special drinks like Beefeater gin, socialized with the other guests, and admired the Tower relics adorning the historic pub’s walls.

Once the time approached 10 pm, we all filed outside to watch the Ceremony of the Keys. This is the nightly locking-up of the Tower by the guards, and the ceremony has occurred every night for over 700 years. Details like the guard’s candle-lit lantern, the iron keys hanging off a large ring, and a soldier’s bugle song that signaled the conclusion of the ceremony made me feel as if I had been transported back in time. It was an unparalleled experience to share with my Notre Dame peers and a wonderful welcome to the city that I get to call home for the next few months.

Learn more about the Notre Dame Club of London.