Rev. James M. Lies, C.S.C., a priest of the Congregation of Holy Cross, has been appointed director for Catholic initiatives and outreach at the University of Notre Dame’s London Global Gateway by Michael Pippenger, vice president and associate provost for internationalization. 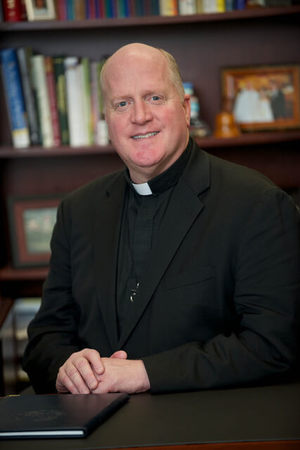 In his role, Fr. Jim is charged with deepening the ties of the London Global Gateway to the local church, the Archdiocese of Westminster, the Diocese of Southwark, local parishes and nonprofits, and Catholic and other educational institutions. Fr. Jim will also provide orientation programming for current and new British faculty and staff on the history and mission of the University of Notre Dame, and the history, heritage, and charisms of the Congregation of Holy Cross. He will facilitate local, regional, and international conferences, lectures, and symposia on Catholic thought, history, culture, and social teachings. With a concurrent appointment as a special professional faculty, Fr. Jim will also teach in the undergraduate program of the London Global Gateway.

Before entering the Congregation of Holy Cross in 1991, Fr. Jim served at the University of Notre Dame as assistant rector in Holy Cross Hall; assistant director of residence life; and rector of the undergraduate residences in the Notre Dame London Program (1987-1990). Later, upon his ordination to priesthood, Fr. Jim served at Notre Dame as assistant director of retreats & spirituality in Campus Ministry (1996-2000) and as rector of Zahm Hall (1997-2000).

“I’m excited to take up this new opportunity and to work with NDI and the impressive team in London,” Lies said. “I’m delighted to join them in further enhancing the efforts of the London Global Gateway, especially as we hope to make it an international crossroads for conversation around Catholic thought, history, and culture; and as we attempt to deepen our ties to the local Church and the community.”