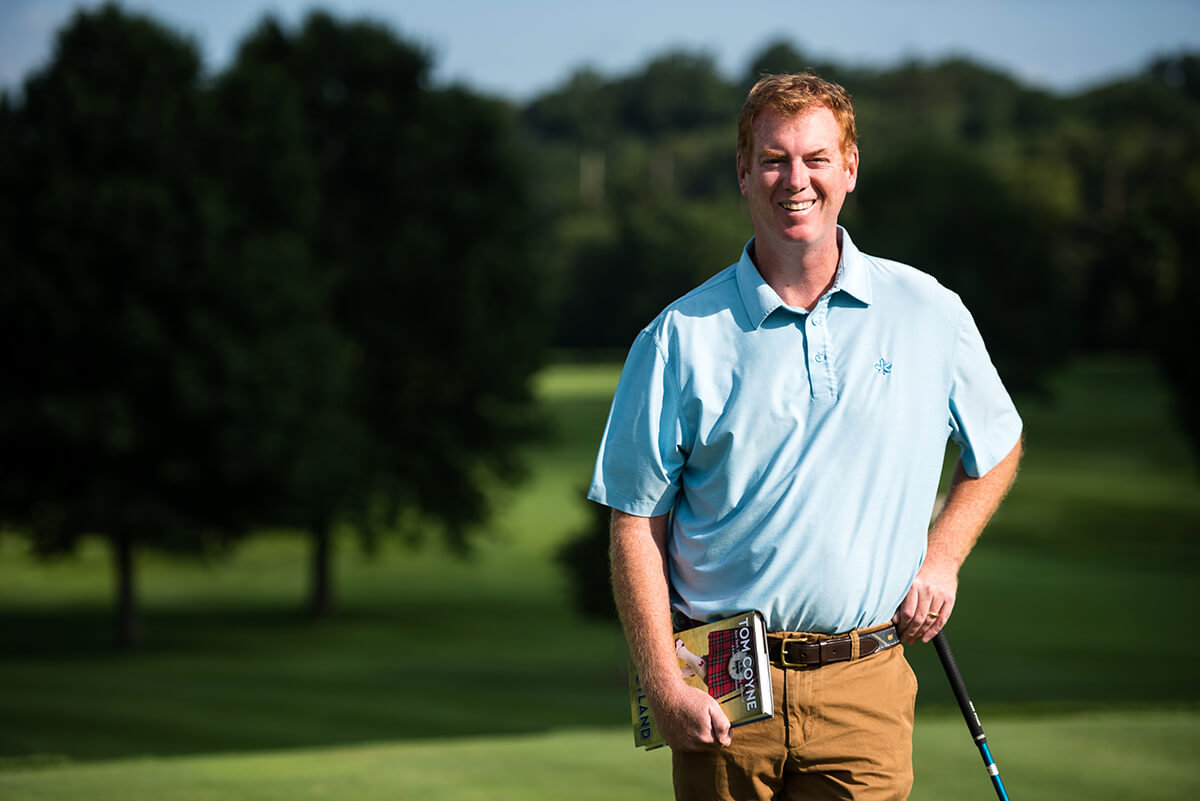 When Tom Coyne 99’ was nineteen years old, he thought about his future in terms of major, grades, graduation, and job. Now a bestselling author, screenwriter and English professor, Coyne points to his semester in London as the reason he veered off the predicted path.

“Being in London where there are so many people living creative lives, I saw it as a reality rather than just a pipe dream,” reflects Coyne. 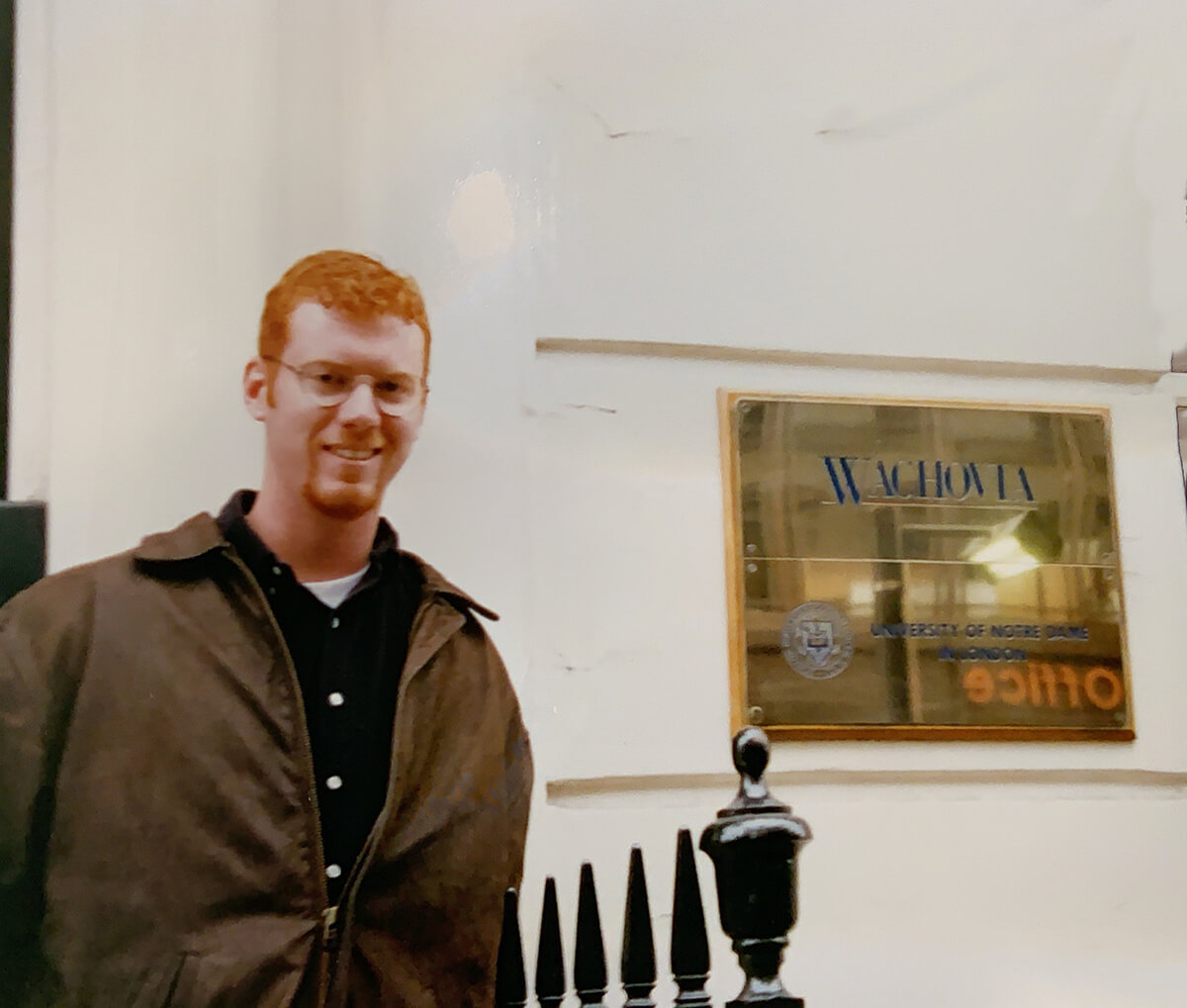 Coyne outside the London Global Gateway

Coyne saw that the streets of London were alive with creativity, as they still are today. The West-End is packed with venues showing classic Broadway musicals, experimental theater, and comedy. The South Bank is lined with art galleries, pop-up performance spaces, and artisan markets. The soundtrack to each area is dependent on the nearest busker, which could be an acoustic guitarist, a full scale brass band, or anything in between. Living in a city so rich in the arts, it is not surprising that Coyne unlocked the creative part of his own personality.

“I got my ear pierced, which is a small gesture, but I wasn't the ear piercing type before I went!” laughs Coyne. “It was just like hey, I want to be bohemian, I want to be different, and I want to explore this difference.”

The opportunities to meet creatives were limitless, and some of the most inspiring encounters were with the faculty that taught at the London Global Gateway. Coyne took classes with a Shakespeare professor who was a working actor and artist. His professor of Victorian Literature had her own one-woman show about Charles Dickens’ wife. To build relationships with people who were making a living from their art, shifted Coyne’s focus and emboldened him to pursue writing as a profession.

“I loved my time in London so much; every day there was inspiration and excitement and energy and I didn't want to lose that,” says Coyne. “I came back to school and just started writing and publishing everywhere I could.” 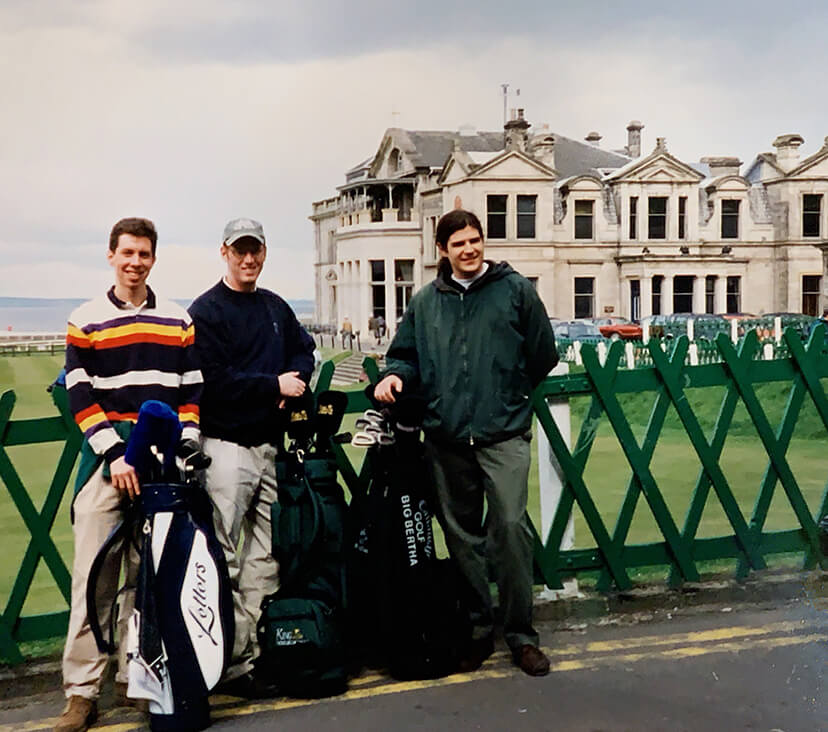 Coyne and friends on a golf weekend in St Andrews

Taking a swing at being an author

Coyne’s decision to pursue writing as a profession paid off quickly. After returning from London, he went to graduate school in creative writing at Notre Dame and wrote his thesis on a golf prodigy. The book, “A Gentleman’s Game,” was published and made into a movie, launching Coyne’s career as a golf writer.

“It was great. It marries the two things that I really know anything about: golf and writing,” says Coyne. “It's been a great run.”

Although he wasn’t able to practice golf often in a city like London, Coyne talks about a golf trip he took during his semester abroad that turned out to be a significant moment, one that affected the track of his career. One bank holiday weekend, Coyne and his friends took a train to St Andrews. They spent the weekend exploring spectacular golf courses and even won the lottery to play the "Old Course," the oldest and one of the best golf courses in the world.

“I measure all my golf travel getaway weekends against that weekend,” says Coyne. “It was spontaneous, we were young, we had no money and we were living out our fathers’ dreams.”

It was this weekend that eventually led Coyne back to Scotland years later to write his latest bestselling novel, “A Course Called Scotland," which follows Coyne's quest to play every links course in Scotland.  The highlands are the home of the sport, and Coyne’s novel chronicles his journey to nearly 100 of the nation’s courses. It is a testament to his love for the sport, its history, and its birthplace, and it all leads back to that first visit during his semester abroad.

“Without that weekend and that initial taste and exposure to St Andrews, that story would probably never have happened,” states Coyne. “So living in London had a very tangible impact on the trajectory of my books and my writing.”

A sense of wanderlust 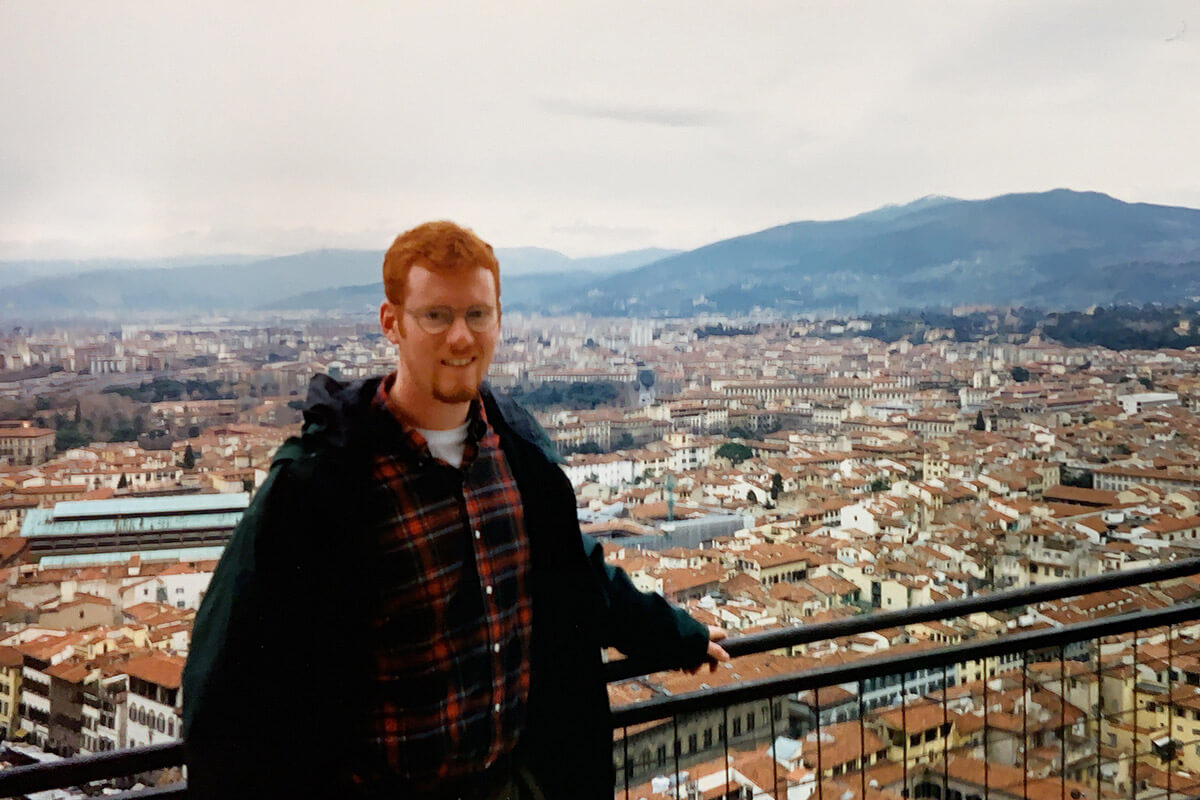 Golfing is the subject of Coyne’s literature, but it’s inextricably linked to the theme of travel. He wanders the globe in pursuit of knowledge about the sport and its history, and loves the experience of traveling as much as the game itself. He attributes his thirst to learn more about world to his first taste of it when he studied abroad in London.

“I had a lot of wanderlust stirred up,” remembers Coyne. “I wanted to travel more, see more things and do more things. My career has allowed me to do that.”

People come to London from all over the world to live and work and they bring their culture with them. It’s diverse in every sense and is truly an international city. Spending a semester in this melting pot of music, food, art, religion and culture allows students to learn so much about the world. Coyne found that his perspective shifted dramatically during his semester in London, and he came back with a broader world view.

In his everyday life in London, Coyne had interactions with people from Africa, Asia, Eastern Europe and further afield. He had conversations with cab drivers, and in pubs or on the tube and built relationships with people he never would have met in South Bend. He learned an incredible amount from those around him, and quickly realized that American ways of thinking are not necessarily shared throughout the world.

“Travel is perspective shifting and it creates empathy,” says Coyne. “You start to think of the world as larger than just your own path of existence and become more aware of how other people from around the world think about things.” 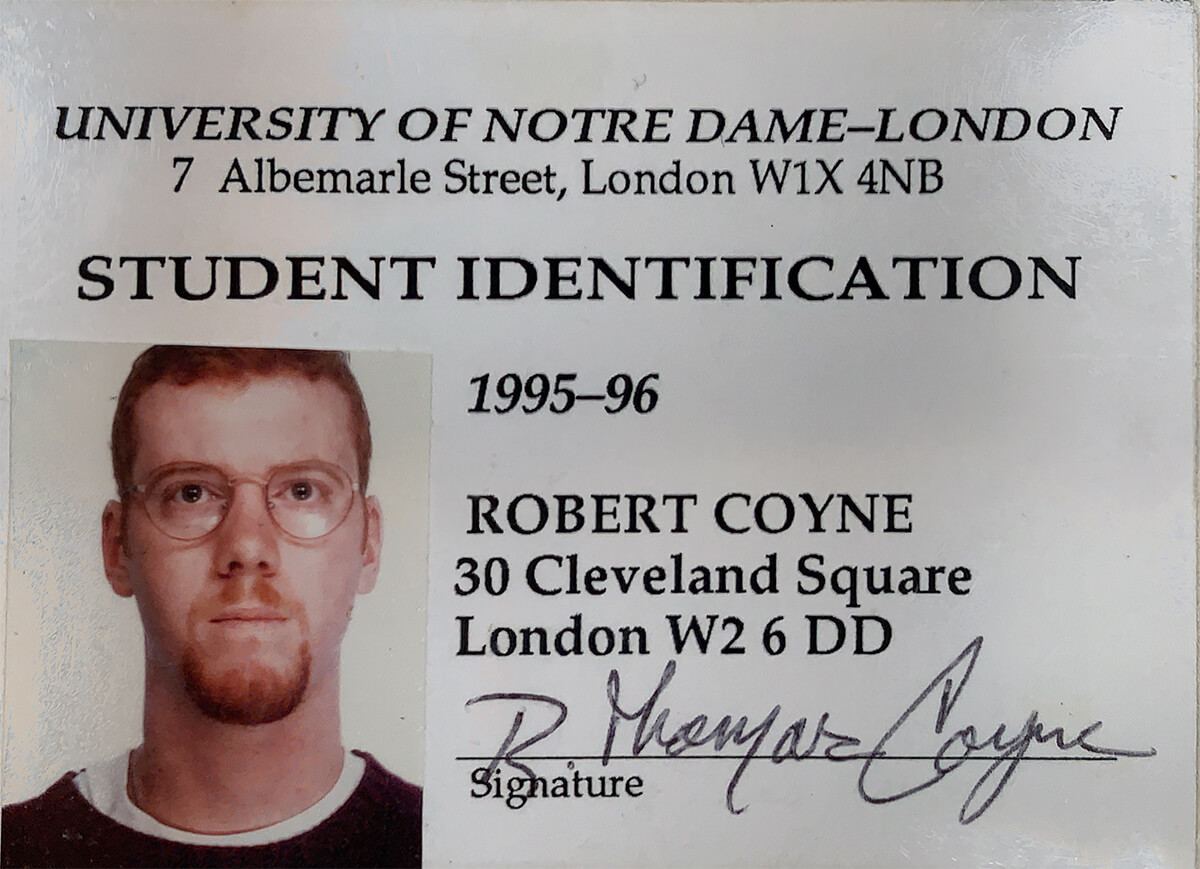 Coming out of the bubble

Coyne was not alone in his cultural awakening. What made his journey even more special were those people who were riding along with him. The cultural richness of London has meant that the program has always attracted students from the College of Arts and Letters, with intellectually curious students being drawn by the opportunity of being exposed to the arts.

“There were a lot of free thinkers that I met in London that I wouldn't have met had I stayed in my group of friends in South Bend,” reflects Coyne

Coyne’s creative soul was nurtured by the presence of other artistically inclined students. In his flat in London, there were six others, and today two of them are published writers. This exposure to others who were exploring their own creativity and discovering the world of arts influenced Coyne’s decisions and future choices. Instead of thinking of his life in terms of his grades, his major and his eventual career, he started to think bigger about the possibilities the world had to offer.

“London made us more curious as we were all coming out of the bubble, going to theater at night, living on our own, and discovering the city,” says Coyne.

“We all experienced a little bit of an intellectual awakening together, which was pretty powerful.”

The wellspring of success 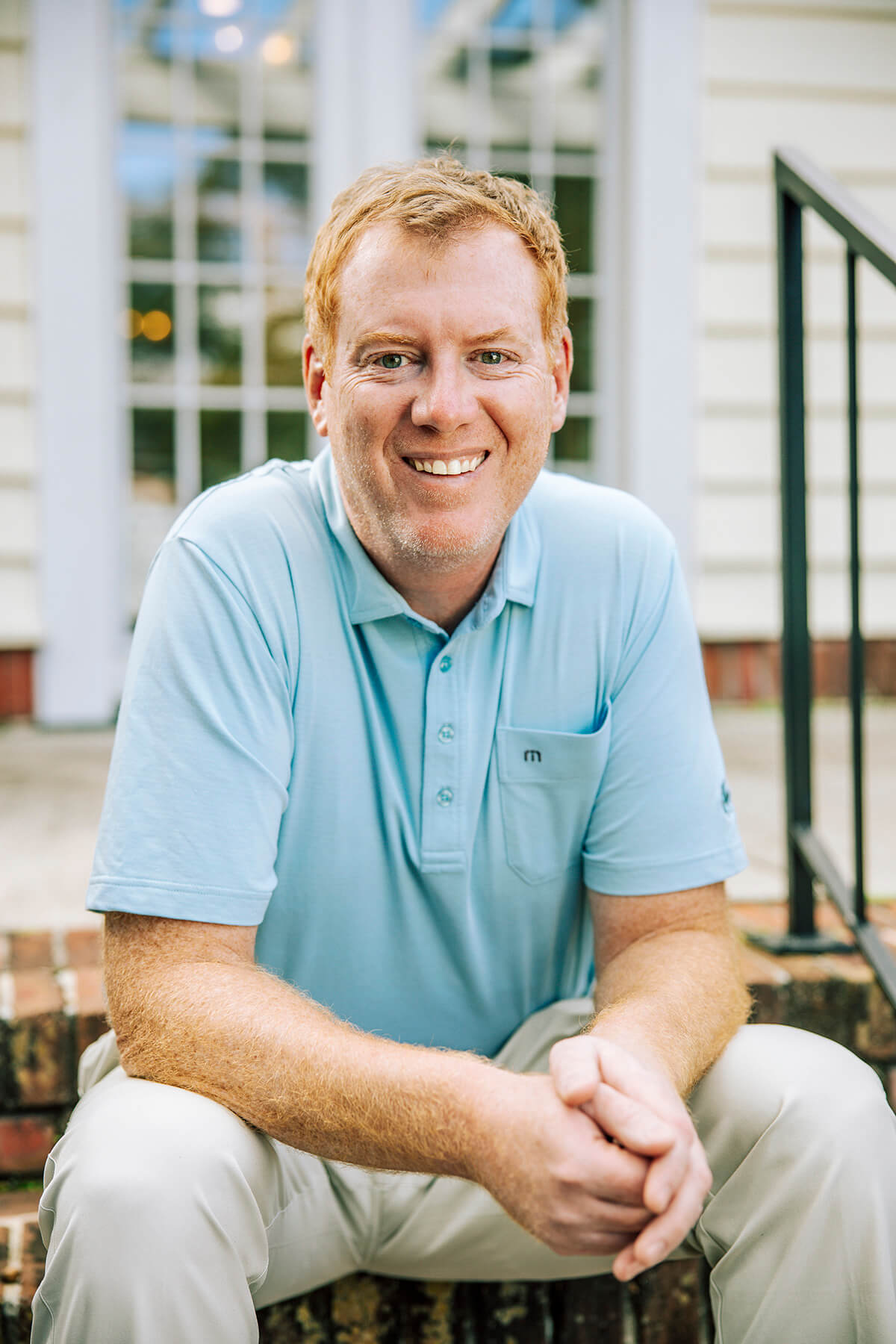 As an English professor at the University of Saint Joseph’s, Coyne has one vital piece of advice for the freshmen that cross his path.

“My only requirement for you about being here at this university is to leave it,” Coyne advises the students. “Find somewhere else in the world that feels like home to you; you'll have that for the rest of your life.”

Coyne knows first hand that studying abroad allows you to see things you haven’t seen before, meet people that you wouldn’t meet, take classes you wouldn’t take, and have your eyes opened to a world of opportunities you didn’t know were out there. He believes that college is not just about academic education, it’s also the time when students should become the most interesting, rounded people they can be.

“The wellspring of your success is how interesting of a person you are, and how much you have to share with others because of the experience you've had,” says Coyne.

The reason Coyne is passionate about giving this advice is because he attributes so much of his own personal development and success to his semester in London. He is extremely grateful for the chance he had as an undergraduate to get out in the world and off the usual path.

“Looking back, I am grateful for my college experience, reflects Coyne. "The first thing that I think of, and what anybody who went to the London program thinks of, is London.