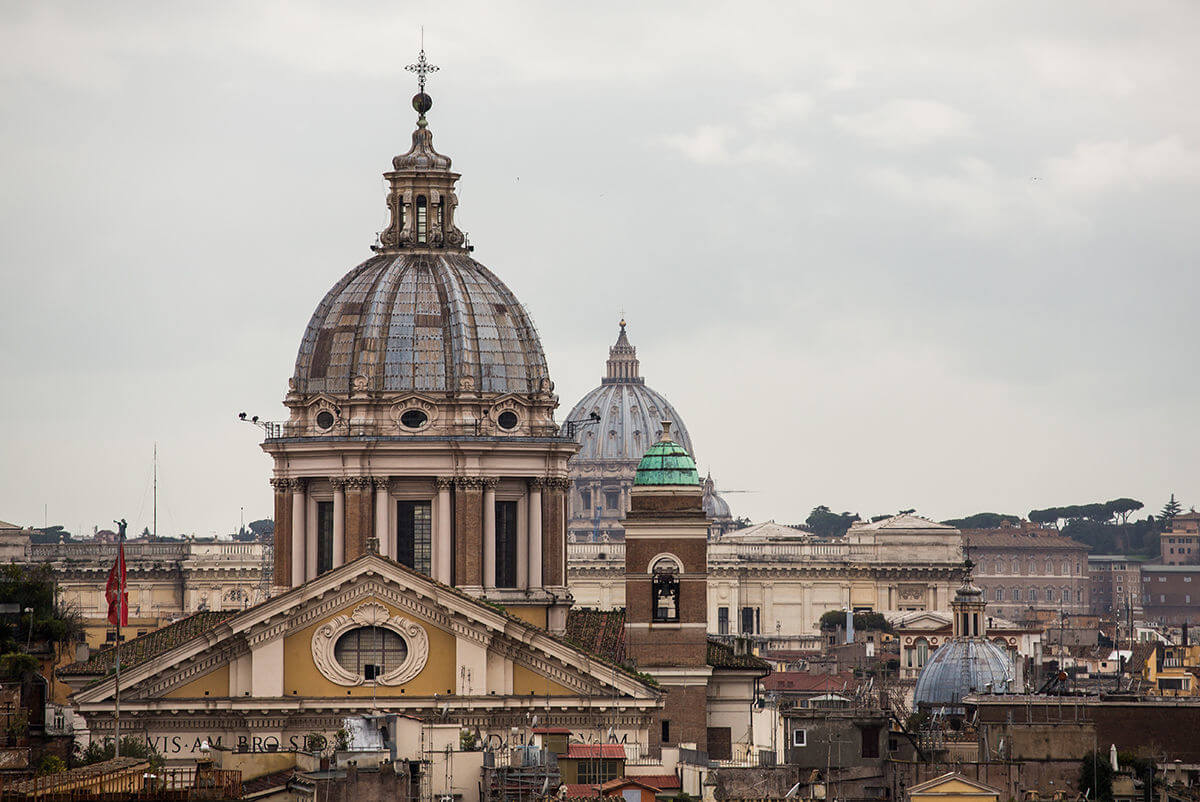 When Margaret Derwent Ketcham was a third year student of architecture in Rome, the predominant palette of the city was a terracotta orange. Today, the hue is different.

“It has been gradually changing to a light blue, white palette,” says Ketcham. “It just changes the whole look of it.”

Ketcham has seen this change occur in Rome over the years, and has most recently spent time there for the 50th Anniversary of the School of Architecture. Over several weeks, she visited Notre Dame’s campuses in London and Rome, and remarked on how the University’s buildings worked alongside each city’s wider architecture to shape the students’ experience in Europe.

“These cities inform students that there’s a type of walking life that you can have that’s very rich,” explains Ketcham. “You can walk for miles and miles and see wonderful buildings, squares and piazzas.”

It is unsurprising then that the location of Notre Dame’s buildings in both cities allow students to fully embrace the city lifestyle, being just a stone’s throw from key cultural, historical and architectural sites. This is something long-known by the School of Architecture which, since 1969, has required undergraduates to spend their entire third year in Rome as part of their Rome Studies Program. Directors believed the Eternal City offered students an opportunity to immerse in the classical and vernacular urban architecture which are foci of the five-year program. 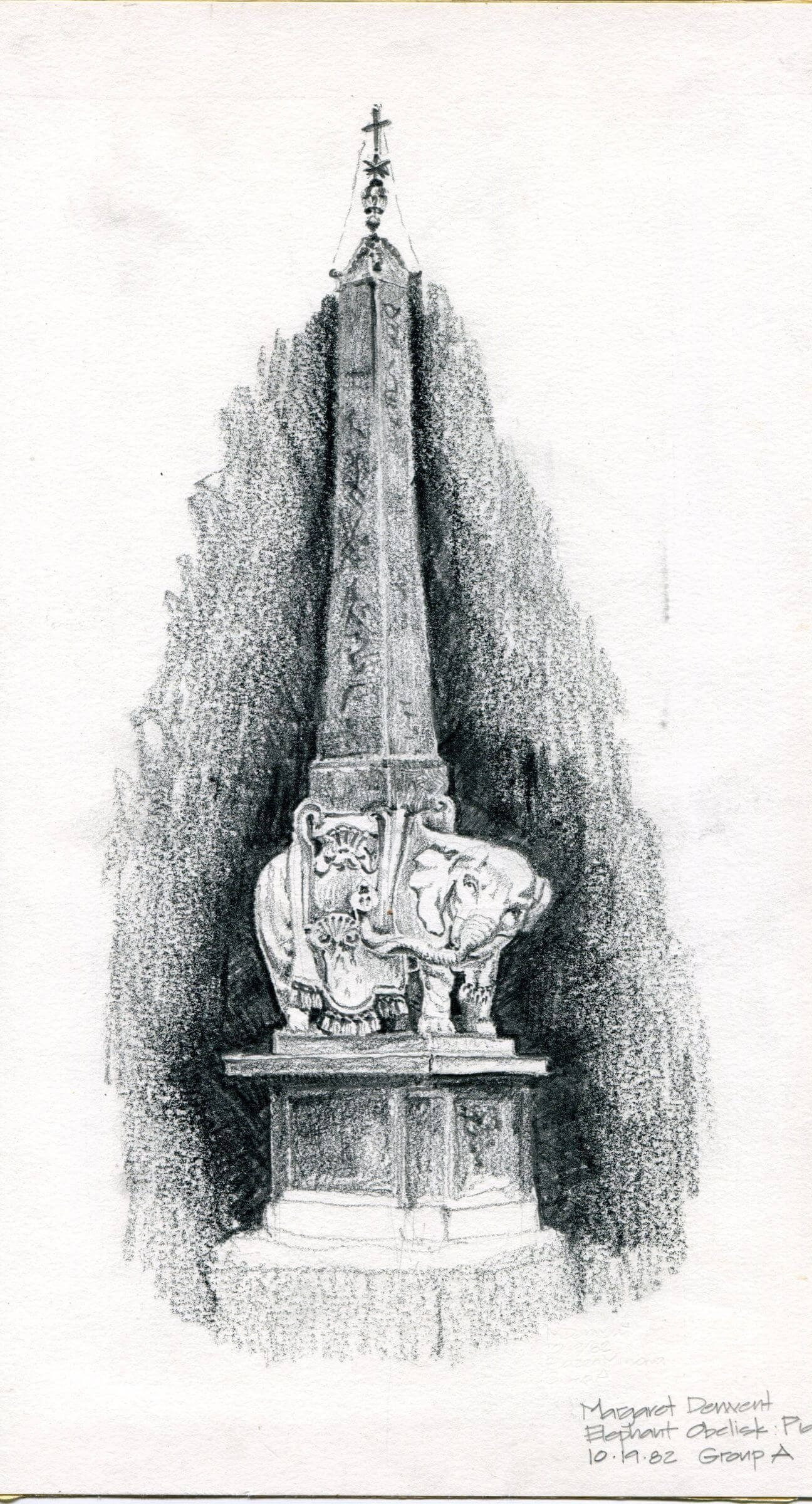 Ketcham was one of the thousands of Architecture students who came to Rome for her third year and took classes in a building close to the Pantheon in Via Monterone. Fifty years later, architecture students are still residing, sketching, and studying in Rome each year. Since 2001, other undergraduates have joined them and they have moved to a consolidated building, designated the Rome Global Gateway in the Caelian district.

To accommodate the need for the blossoming academic program in Italy, the Rome Global Gateway officially opened its doors in 2014 after restoration was completed on the beautiful Via Ostilia, in the Rione Celio (Caelian neighborhood), on the slopes of the Caelian Hill, overlooking the Palatine, Aventine, and Esquiline Hills. Although Ketcham has fond memories of the central location of Notre Dame's premises when she was a student, she sees how the new location makes Rome a more accessible city for students today.

“It’s a wonderful location in terms of allowing students access to the city, but giving them a little space away from what has become a really crowded dense urban center,” says Ketcham. "Coupled with the residential villa and grounds, it forms a campus away from home"!

The Gateway's location is indeed in the heart of Rome, just steps from the Colosseum, yet it remains peaceful and quiet. The neighborhood is speckled with Roman monuments and churches, but it remains lively and mainly inhabited by Romans (by either birth or adoption), rather than tourists. From the Rome Global Gateway, the rest of the city is but a short walk away.

The same is true in London, where the original pioneer from Notre Dame was the Law School in 1968. In 1981, an undergraduate program was established in London and by 1998, student demand to come to London was so high the University moved to a massive new property, designated the Marian Kennedy Fischer Hall.

The building is just as central as Rome’s Gateway, so close to Trafalgar Square that students can hear the faint noise of buskers floating through the windows as they take classes. 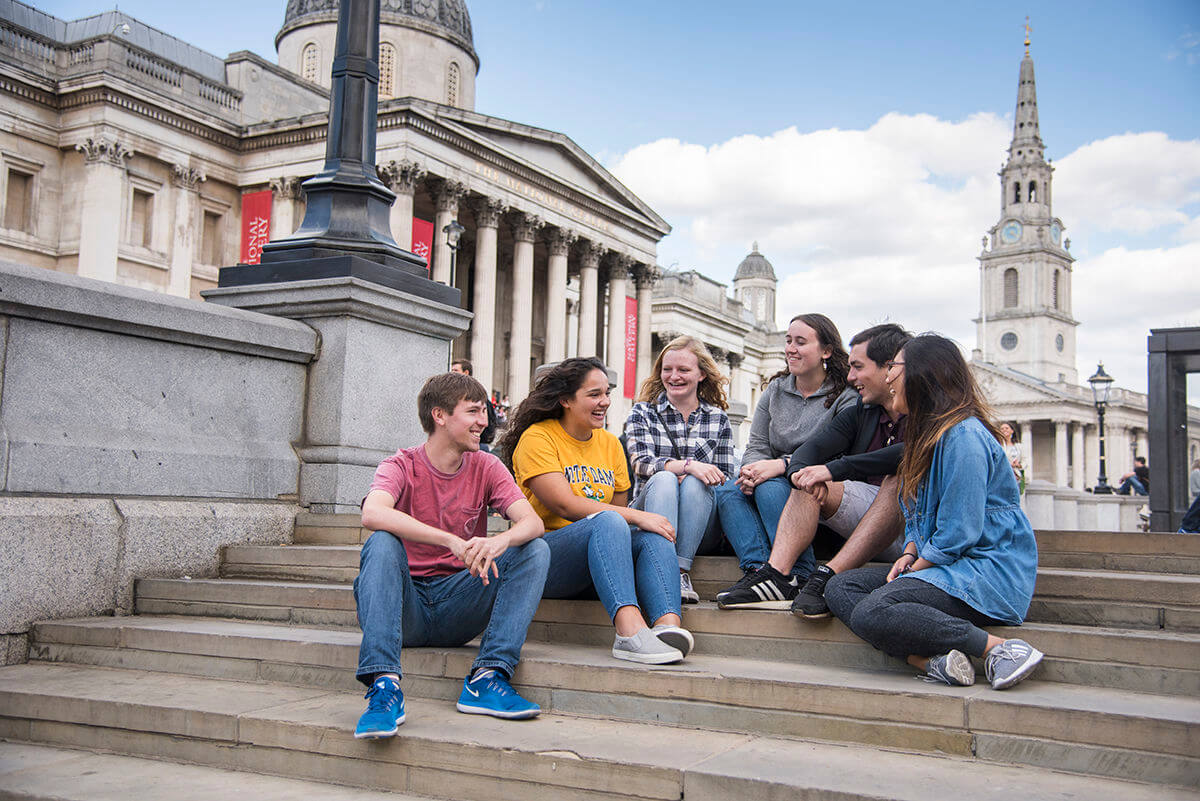 Students in Trafalgar Square, just next to the London Global Gateway

Ten minutes walking in one direction leads students to the perfectly manicured St. James' Park, where they can look out for convoys of royal cars that travel from Buckingham Palace down the Mall with tinted windows. Ten minutes in the other direction leads them to Westminster, where they can listen to Big Ben strike the hour and experience the buzz of politics, culture and history coming together all in one place.

Similarly to Rome, Ketcham found the design of London to be impactful to the student experience, particularly the central location. It allowed students to understand that there is a “walking life,” that doesn’t necessarily exist in the U.S., except in the oldest urban centers or now in new traditional neighborhoods.

Both London and Rome are intersections of history, politics and culture, and this is reflected in the architecture that frames the cities. Students who venture to Europe are able to absorb so much just by living in places rich in history.

“If everything is a teaching moment then your job gets to be done for you,” laughs Ketcham.

Learning with every footstep 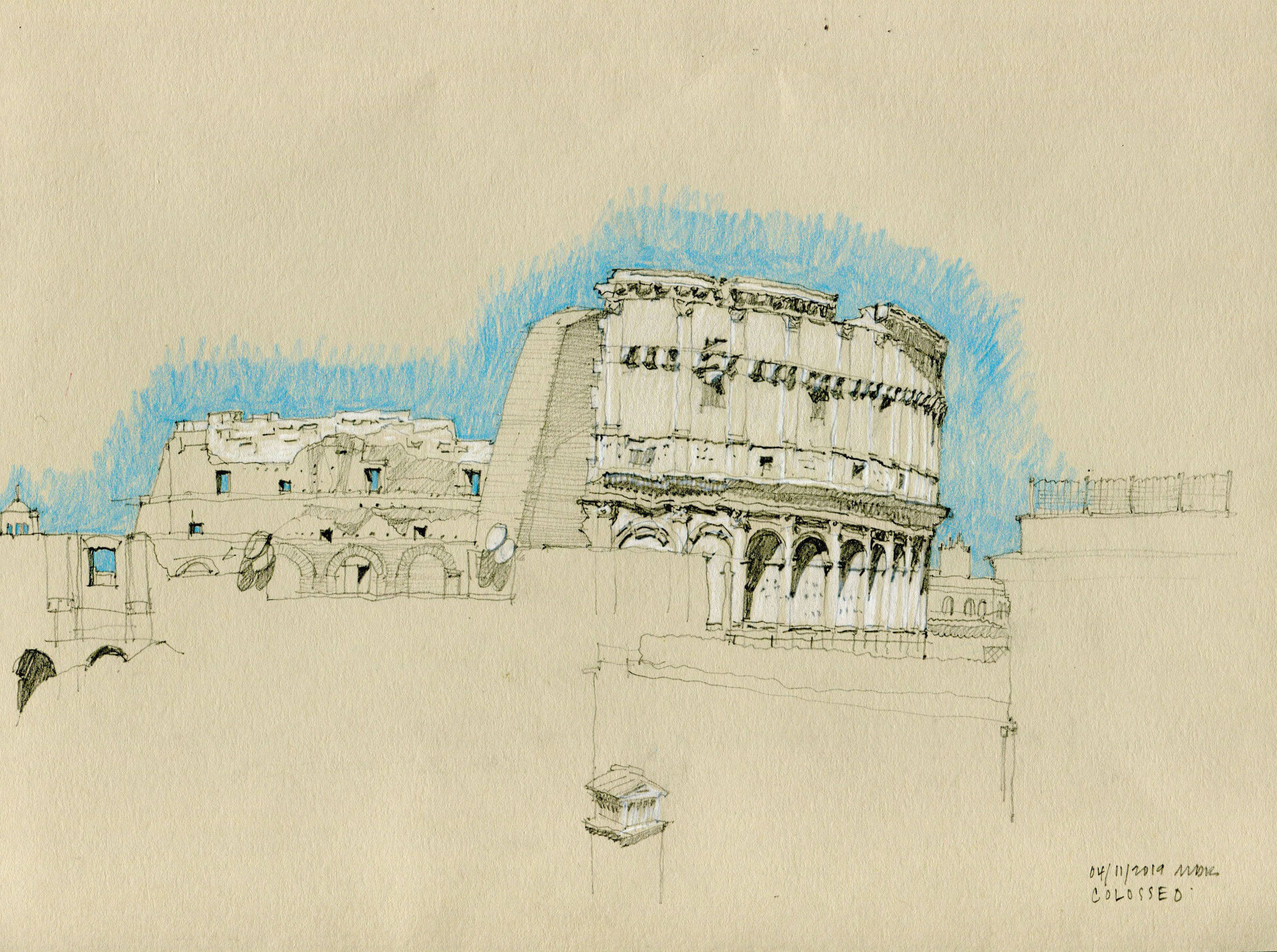 A sketch of the Colosseum that Ketcham did from the Roof of the Rome Global Gateway during the reunion, 37 years later

Ketcham certainly found every moment was a teaching moment when she spent a year in Rome.

“I had never seen a city that was thousands of years old before,” commented Ketcham. “I was impressed by how old the city was, and how it was so very dense with something interesting at almost every footstep.”

When Ketcham came to Rome for the architecture program, it was the first time she was leaving the U.S. and visiting a European city. She was struck by how original buildings and monuments were still there and so highly valued by the population, shaping her understanding of world architecture.

Rome was also the place that Ketcham began to explore the artistic side of architecture. The year Ketcham studied in Rome, Professor Frank Montana, the 1936 Paris prize winner and Rome Studies founder, was teaching a drawing and painting class. This completely new experience and approach changed Ketcham’s life for good.

“In Rome my love for drawing from real life started,” says Ketcham. "I have it today. I am still a practicing architect and artist. In Rome it was the first time I had been given instructions in art, on what to see and how to recognize the value that goes beyond the face value. The whole opportunity and exposure was for me life changing.”

Reading the stories that architecture tells 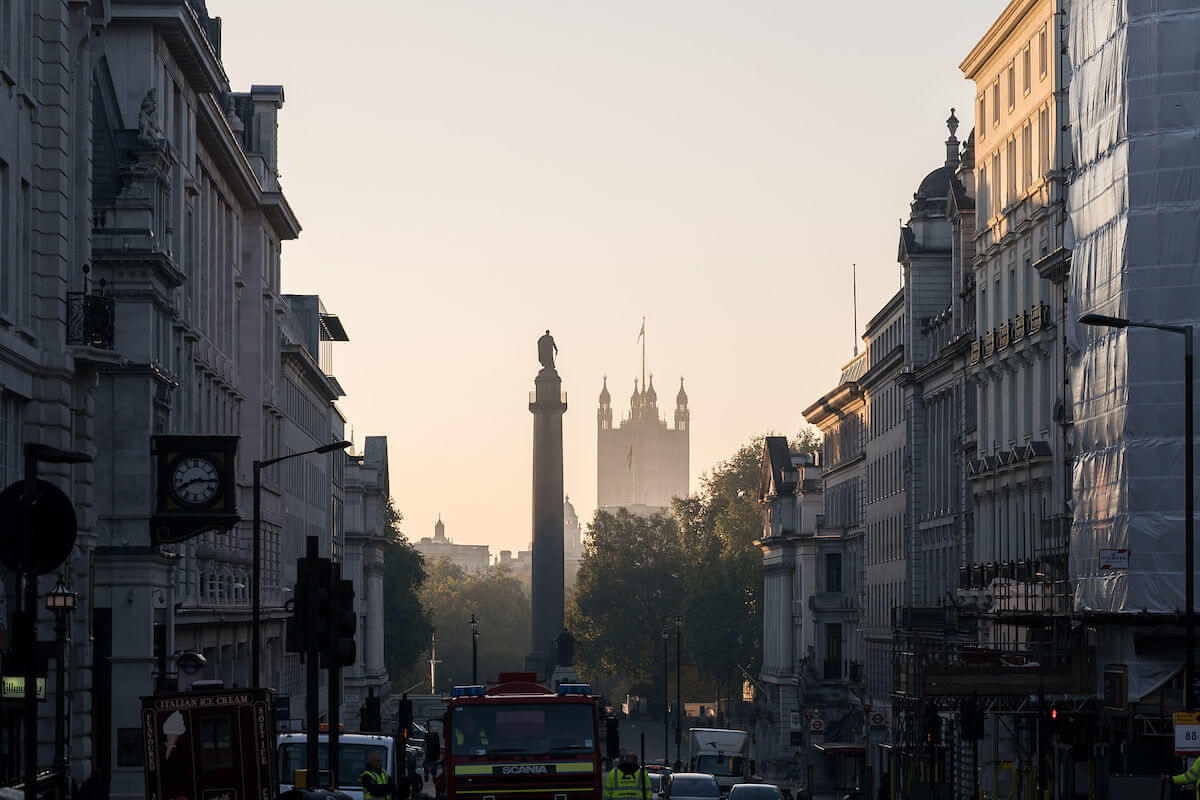 A view of the Duke of York Column near Westminster, a minutes walk from the London Global Gateway

For first time visitors to London and Rome, the particular character of each city makes them appear entirely unalike. The colors are different, the stone is different, the street signs are different, and of course, the weather is completely different. What Ketcham appreciated after spending time in both cities was that they followed a similar set of patterns. Both cities exhibit the patterns of places that existed before cars, and pedestrians zones are changed and altered to protect historical landmarks.

“There is an underlying similarity of those patterns, that certain civic and religious structures are important and are given pride of place and prominence,” reflects Ketcham.

She says it’s important that the students are  able to read the stories that the architecture tells in both cities. They can see when architects in London were influenced by their peers in Rome, bringing back ideas and implementing them in the buildings they design. They can see how the Catholic Church was changed to become Anglican under Henry VIII in England, while it remains a bastion of Catholicism in Rome.

“You understand you can see the stories through the development of various buildings,” says Ketcham.

"When students come to either of the situations and they see that these large cities influence each other in terms of cultural development, way before the United States was born, they get a sense of perspective of history and politics.”

The effect that a new city and its architecture can have on a student’s development is profound, particularly when they are discovering so much about themselves. Ketcham was struck when she returned to Rome for Architecture’s 50th Anniversary by the people who returned with her, and the number of lives that the program had touched, or even altered. 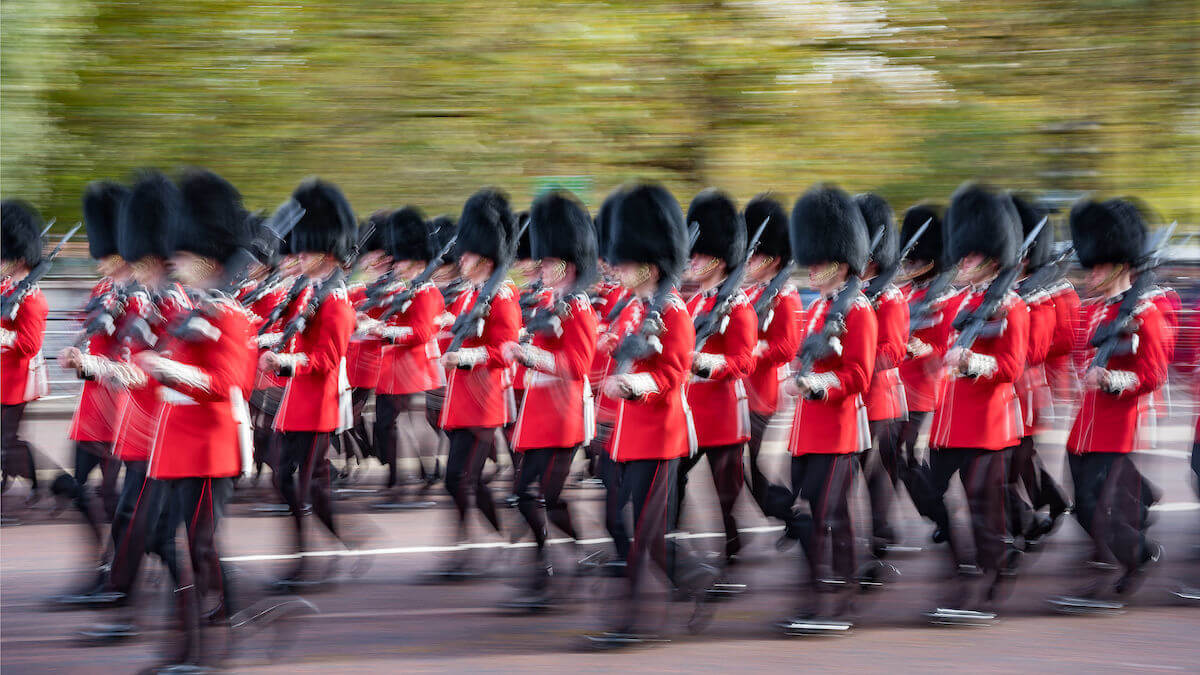 The changing of the guards near Buckingham Palace

“There were all of these people that had experienced the same or very similar experience as I had,” says Ketcham. “To meet them and to talk about the shared experience was terrific. You just saw the generations of people and what they had done in the world, those who were older and those who were just starting out, but all with experience of Rome.”

As the network of Notre Dame’s buildings grows and expands into new cities, countries and continents, the University will continue to inspire new generations of students to discover more of the world, and the architecture that frames it.

Learn more about Notre Dame's buildings in London and Rome by clicking below!