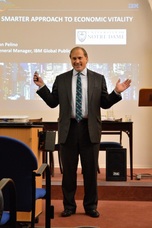 In his talk entitled A Smarter Approach to Economic Vitality, Pelino discussed the changing landscape of globalization, and traced the movement of populations and economic redefinition of cities, using examples of Rio, China, London and the Olympic Games.  He asked his audience, as future leaders, “What type of economy are you helping to build?”

“The part of the lecture that spoke to me the most was Mr. Pellino’s assurance that the future is not what we expect.  I am particularly interested in the medicine side of it and what he said about telemedicine” said Stephen Bowen, a Biological Sciences major at the College of Science, who is currently studying in London.

“My peers and I will probably not even recognize the world we end up working in.  This is exciting but scary, because one of the things I look most forward to about becoming a doctor is the interaction with patients. I hope that the one on one aspect isn’t lost to telemedicine with doctors Skyping with their patients.”

Several members of the IBM Corporation also attended this event, as did Tine van Bortel, lecturer in Global Health at the London Global Gateway, Laura Castrillo and Conrad Engelhardt, student coordinator and lecture coordinator of the ND Alumni Club in London, as well as other club members.  Engelhardt, who teaches Biochemistry at the London Global Gateway, concluded “it gave some interesting insight about the future trends in globalization from a leader at IBM, itself a premier global corporation.”

Originally published by Emily Grassby at international.nd.edu on November 27, 2013.