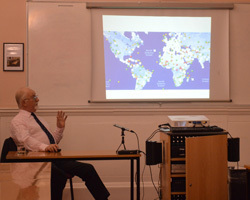 The University of Notre Dame and the Institute of Historical Research, in collaboration with the University of Oxford Centre for Global History, sponsor the series, which happens every spring semester.  It brings together experts in world history to discuss and debate cultural, religious, political, and social issues.  For Notre Dame, Felipe Fernández-Armesto (William P. Reynolds Professor of History, University of Notre Dame, and Professor of Global History, London Global Gateway), organizes the event, with co-conveners who are among leading historians at the great Central London colleges of the University of London (King’s, UCL, LSE, SOAS, Birkbeck, and Queen Mary).

Beginning the 2014 series was Norman Hammond (Universities of Boston and Cambridge) who is a prominent figure of Maya archaeology, author, and archaeology correspondent for The Times.  In his talk The Ancient Maya Civilization and the World, Hammond traced the history and discovery of the Mayan civilization through manuscripts, paintings, and photographs, and explained the ascent of the Maya in the nineteenth century to the “Premier League” of ancient civilizations in popular interest and esteem. 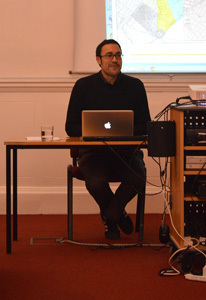 In the following session, Thomas Tweed, Professor of American Studies at University of Notre Dame, discussed the history and theory of religion around the world in Toward a Global History of Religion, arguing that the abundance of evidence for the Mesolithic period made that era a suitable starting-place.  The following week, Jon Coleman, Professor of History at University of Notre Dame, explored society and nature in Humans and Other Animals, sharing fascinating evidence about the interdependence of humans and domesticates in the crossing and colonization of the North American West.

In March Tim Blanning (University of Cambridge) and Pierre Singaravélou (L’Université Paris-Sorbonne) took the floor.  In a highly entertaining and interactive seminar, Blanning explained musicians’ rise to political influence and cultural authority, from Mozart to Queen and Beethoven to Oasis in The Triumph of Music in the Modern World.  He argued that romanticism was decisive: privileging an art that was emotional rather than referential.  Singaravélou’s talk Laboratory of Globalization? focused on empires, globalization, war and legal theory in Tianjin in the late nineteenth and early twentieth centuries, when the division of the city among foreign powers had an unprecedented impact.

The penultimate seminar was a debate entitled The Scientific Revolution in honor of Patrick O’Brien.  Professor O’Brien (LSE and St Antony’s College, Oxford) founded the Global History Seminar when he was Director of the I.H.R.  The panelists – Professor Richard Drayton, Professor Rob Iliffe, Professor Alan Powers and Dr Andrew Wear – and the audience examined the honorand’s celebrated and controversial paper in last year’s Journal of Global History.  O’Brien rehabilitated the concept of a Scientific Revolution as a decisive episode in the shift in the balance of power, wealth, and potential in Eurasia, and dated the beginning of that shift to about 1500. 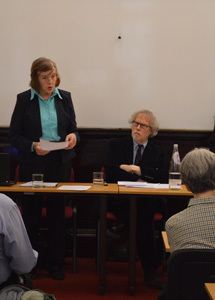 Finally, The Palestine Question in Global Context saw Professors Mary Grey and Dan Cohn-Sherbok arguing candidly but courteously over the causes, outcomes and prospects of the Palestinian question with the famous Muslim intellectual, Professor Ziauddin Sardar, and Palestinian journalist Lana Asfour.  The discussion ended the Global History Seminar Series on a high, with heated and animated dialogues, which continued beyond the seminar room.

Regarding the series, Felipe Fernández-Armesto said, “The seminar is unique: uniquely informal, uniquely ambitious, uniquely convivial, uniquely entertaining.  We look at the whole world at once.  We don’t have papers or lectures, but invite cutting-edge scholars to ruminate aloud about their current and prospective work.  Instead of routine Q&A sessions, we try to have real conversations, without a chairman or moderator, and we allow plenty of time for discussion.”

Originally published by Emily Grassby at international.nd.edu on April 15, 2014.