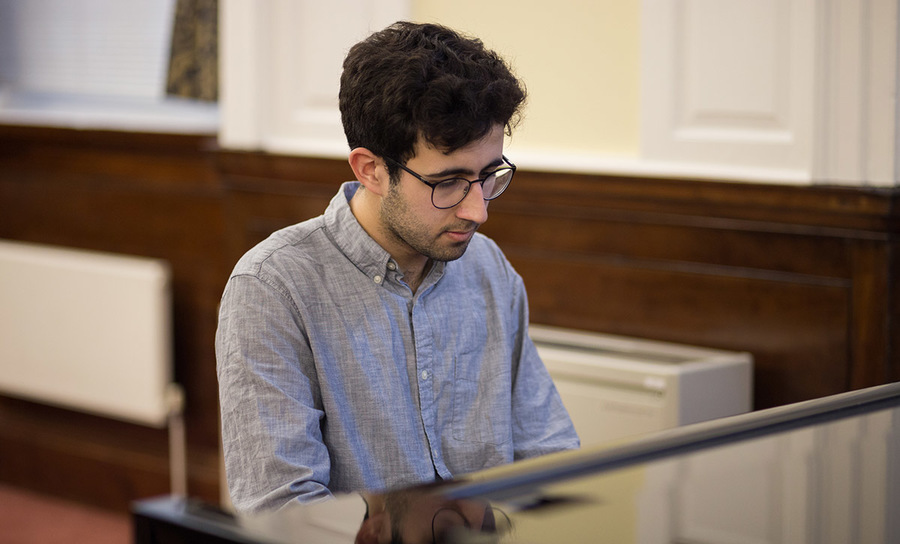 The elegant, drifting echoes of piano and cello became a welcome soundtrack to London’s Fischer Hall last semester. The program was hosting Notre Dame music major Alex Mansour, who made the most of the building’s musical facilities, and of London’s rich music scene. It was this culture of the arts that motivated twenty-one-year-old Mansour to spend a semester in London. Describing music as “a way to experience community," Mansour stepped away from his life in South Bend and threw himself into the dynamic and limitless musical culture of England’s capital city.

Mansour is skilled in both classical and jazz piano, and it didn't take long for him to discover the jazz bars that London has to offer. On a Wednesday night, he would visit world famous jazz club Ronnie Scott’s, where the house band would finish at 11pm, and the floor would open up for people to come up and perform. The standard is high, and as the night rolls on, the crowd reduces to talented musicians who are there to play. According to Mansour, “there are probably 300 must-know jazz tenets," and if it’s not going well when you’re performing, there is always a musician willing to swap out with you. Although Mansour describes it as sometimes being anxiety-inducing, he’s quick to talk about how thrilling the experience is to not be in control.

In this sort of high-pressure situation, surrounded by professionals, it’s easy to feel intimidated. Mansour, however, relishes this opportunity.

He believes that experiencing failure only drives you to work harder and push further to achieve excellence. Mansour certainly found this level of excellence in London.

"It's a tremendous introduction to the caliber of professional musicians," he says.

This high standard is widespread in London, and not only in professional settings. Mansour’s daily walk home through Trafalgar Square opened his eyes to the talent on the city’s streets. From rock bands to classically trained violinists, the busking community has it all.

The community of arts in London shapes a lot of students’ experiences, giving them the opportunity to see a vibrant part of British culture. Mansour’s engagement with the arts went far beyond performing at the jazz clubs. He was lucky enough to have a composition teacher from Royal Academy of Music, who introduced him to fellow London-based music students. Spending time with these students on excursions and at social events gave him the opportunity to experience genuine British student life. Mansour sees this cultural immersion as vital to his self-development.

"A very different sort of learning happens when you immerse yourself in a different culture," he learned.

Mansour plans to keep building on the knowledge he has gained in London, with his summer schedule unsurprisingly full. He will spend some time interning at a studio owned by legendary film score composer Hans Zimmer, getting a chance to learn about the business side to music. He hopes this will inform his decision about grad school, and whether to study film score, or to focus on composition. As if this wasn't impressive enough, Mansour has just finished scoring a documentary about the life of Fr. Hesburgh, set to debut at Notre Dame in time for football season!

Learn more about other opportunities available in London while studying abroad.