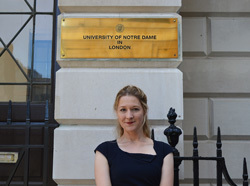 Candida Moss, academic and Professor of New Testament and Early Christianity at the University of Notre Dame, held a Theology conference at the London Global Gateway’s Fischer Hall on July 3-5.  The event, entitled The Other Side: Apocryphal Perspectives on Ancient Christian ‘Orthodoxies’, brought together world-class academics to discuss the emergence of orthodoxy in early Christianity.

Among the 14 internationally renowned scholars who attended were Christoph Markschies who discussed Models of the Relation between “Aprocrypha” and “Orthodoxy” from Antiquity to Modern Scholarship, Ismo Dunderberg who talked about Valentinian Perspectives, and Judith Hartenstein who presented The Gospel of Mary.

Moss said: “The conference brought together the very best in both European and North American scholarship to think about the way that orthodoxy emerged in the early Church. A lot of ground was covered and I am excited to publish the results. The project wouldn’t have been possible without the generosity of Notre Dame and the beautiful surroundings of the London Gateway.”

Originally published by Emily Grassby at international.nd.edu on July 09, 2014.